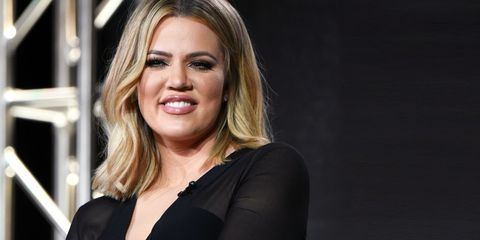 If you've been hiding under a rock and didn't already know, Khloé Karadashian gave birth to a baby girl yesterday, just two days after videos of Tristan Thompson allegedly cheating were leaked online. And if you were like, "wow, I really wish I could know what went down in the drama-filled delivery room," then you're in luck! Maybe.

Sources confirmed with People that the Keeping Up with the Kardashians camera crew was at the hospital to film the entire thing. "Khloé labored with [mom Kris Jenner] yesterday at the hospital. Tristan was there for the birth,” the KUWTK source told the magazine. “He has practice today, but will spend as much time at the hospital as possible.”

As an added bonus, they were reportedly also following Khloé around during the past few days as the rumors (or rather, proof) of Thompson cheating unfolded.

However, there's been some confusion as to whether or not we'll actually get to see Khloé give birth. A different source told Us Weekly that Khloé's been on a camera "hiatus" since she traveled to Cleveland to give birth.

“Filming is currently underway, but Khloé hadn’t been filming since she went to Cleveland ahead of the birth. She just wanted to have those few weeks of no cameras around,”the source said, adding that the scandal with Thompson will be handled, but that no one knows how yet.

It's unclear as whether or not we'll get to see what would surely be one of the most dramatic episodes in all 10 years of the show (right next to Kylie surprising everyone with the news of her pregnancy). If it is true that birth was filmed, we'll probably have to wait until season 15 to see it, since last season's finale just aired in March. It wouldn't surprise us if they really did film it, but it would also make sense that Khloé would want to keep this a private moment. We'll find out sooner or later.

This content is imported from {embed-name}. You may be able to find the same content in another format, or you may be able to find more information, at their web site.
Alex Warner
This content is created and maintained by a third party, and imported onto this page to help users provide their email addresses. You may be able to find more information about this and similar content at piano.io
Advertisement - Continue Reading Below
More From Celebrity
Rob Lowe: Prince Harry Is Rocking a Ponytail Now
Rihanna Stuns in $2 Million of Diamonds and Rubies
Advertisement - Continue Reading Below
Fans Think Zayn Just Hinted at Proposing to Gigi
Ben Affleck Said J.Lo Faced "Sexist, Racist" Media
Kate & William Might Get Vaccinated on Camera
40 Celebrity Sisters Who Look So Much Alike
Iconic Party Photos From the Past
The Best TV and Movie Wedding Dresses of All Time
40 Rare Photos of Grace Kelly Through the Years