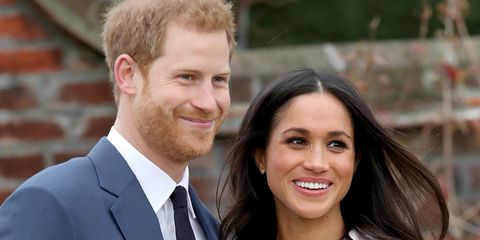 Prince Harry and Meghan Markle's wedding is fast approaching, taking place in just over a month, on May 19. And with the royal nuptials happening so soon, the couple has announced what they'd like as wedding gifts.

Related Story
What You Need to Know About Meghan Markle's Family

Rather than asking for presents, as Prince Harry and Markle likely already have everything they need for their home, the couple have requested that guests make donations to one of seven named charities.

On the official website for the royal wedding, a statement reveals that "anyone who might wish to mark the occasion considers making a donation to charity, rather than sending a wedding gift. Prince Harry and Ms. Markle have personally selected seven organisations they would like to support, reflecting their shared values." Which means anyone can get Meghan and Harry a wedding gift!

Prince Harry and Meghan Markle have asked that people make charity donations instead of #royalwedding gifts. They have chosen causes including sport for social change, women's empowerment, conservation, the environment, homelessness, HIV and the Armed Forces.

As both Markle and Prince Harry are often seen publicly supporting a variety of charities, their move to ask for donations instead of wedding gifts isn't all that surprising.

The charities they've selected are Children’s HIV Association (CHIVA), Crisis (which seeks to end homelessness), the Myna Mahila Foundation (which empowers women in Mumbai's urban slums), Scotty’s Little Soldiers (which supports children who have lost a parent in the Armed Forces), StreetGames (which encourages young people to embrace sport), Surfers Against Sewage, and The Wilderness Foundation UK.

When Markle and Prince Harry visited Wales earlier this year, they saw the impact that StreetGames had managed to have on the local community. Both were overwhelmed by the support and gratitude they received from a group of children who utilize the charity, and there's a sweet video of them meeting their fans:

This is #PrinceHarry and #MeghanMarkle at a @StreetGames event in Wales - the charity is set to benefit hugely from a share of donations given to the couple in lieu of wedding presents, it seems..... pic.twitter.com/LFvC8VouKK