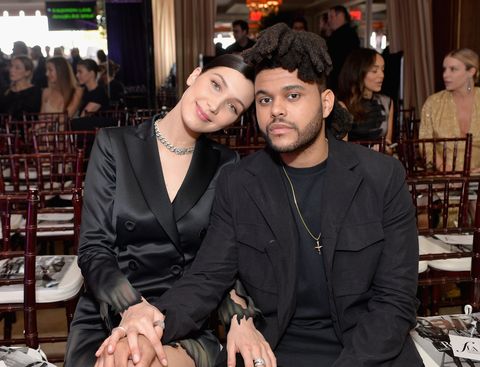 On Sunday, multiple outlets reported that Bella Hadid was spotted kissing her ex, The Weeknd, this weekend. According to sources, the pair “were canoodling and being affectionate as she sat on his lap” at a Coachella party thrown by Kylie Jenner's boyfriend, Travis Scott. "They are 100 percent back together,” the source told Us Weekly.

According to another source, “they were completely all over each other,”and the two “kissed a couple of times and Kylie and Kendall Jenner went over to their table for a bit as well.”

Crazy! Except, Bella says it isn't true. The model commented on an Instagram post from E! News saying nope, it wasn't her, followed by a shrug emoji:

A denial? A clever line from a classic Shaggy song? You decide!

The Weeknd was also seen hanging out with Justin Bieber's ex this weekend—no, not Selena Gomez, calm down. The singer was photographed with his arm around DJ Chantal Jeffries and the two were reportedly "also seen hugging and she also put her head on his shoulder," according to E! News.

The Weeknd reportedly teared up during his Coachella performance Friday night, when he sang his maybe Selena Gomez-inspired breakup song, "Call Out My Name." While Selena was definitely not at Coachella for her ex's set (she was busy living her best life, stocking up on Target wines), Bella was at the festival that night and some fans reported seeing her in the audience for The Weeknd's set. He also performed "Wasted Times," which fans have speculated is about the model.