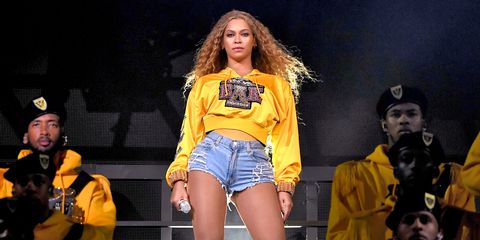 This weekend, Beyoncé took the stage at Coachella for a history-making performance. Not only was she the first black woman to ever headline the annual music festival, her epic, 26-song set was so incredible, fans quickly re-dubbed the festival "Beychella."

For part of her performance, Bey donned a yellow hoodie that honored Historically Black Colleges and Universities and, specifically, their thriving Greek culture. Fans were quick to notice the HBCU shoutout on Twitter.

Beyonce's performance at Coachella was inspiring and gave me much HBCU pride. Like many artists who have come before her, she is driving conversations about social and racial justice. #blackexcellence #fortheculture pic.twitter.com/dI4Qr2rRNh

Beyonce just had to remind y’all why attending an HBCU will forever be lit af!!!! #beychella pic.twitter.com/wCdkvzfkq4

Her fashion wasn't the only nod to HBCUs during the performance, of course. By incorporating an HBCU marching band and steppers in her set, Beyoncé gave the world a headlining performance that celebrated black culture in a moving and statement-making way.

And, because Queen Bey is Queen Bey, on Monday morning, the singer revealed that the collegiate-themed portion of the performance foreshadowed something even bigger—a new HBCU scholarship program.

Through her BeyGOOD initiative, Bey will award four $25,000 scholarships to students as part of her newly-established Homecoming Scholars Award Program. Beginning with the 2018–2019 school year, students at Xavier, Wilberforce, Tuskegee, and Bethune-Cookman will be eligible for the scholarships, according to Variety.

"We salute the rich legacy of Historically Black Colleges and Universities," Director of Philanthropy and Corporate Relations at Parkwood Entertainment (which houses BeyGOOD) Ivy McGregor said of the program. "We honor all institutions of higher learning for maintaining culture and creating environments for optimal learning which expands dreams and the seas of possibilities for students."