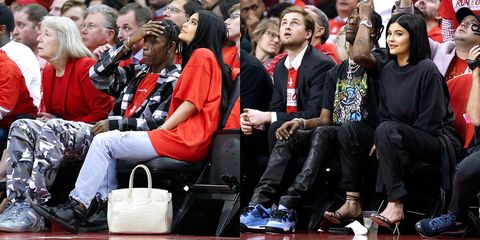 Kylie Jenner and Travis Scott made their public debut as a couple on April 25, 2017, when they were photographed enjoying a game during the NBA Playoffs in Houston. Almost a year later, Kylie and Travis are still going strong, even though a lot has changed for them since that first public date.

They're now parents to a beautiful daughter, Stormi Webster:

They are one happy, adorable family:

thank you @wttyler for putting this together. here’s a little glimpse of the last 9 months. the link is in my bio ♥️

Kylie and Travis and have embraced their new lives as parents, but they're still keeping the romance alive and making time for time out as a couple. Last weekend, they attended Coachella together (where they were first rumored to be a couple last year):

Last night, Kylie and Travis recreated their now-iconic first date, returning to the Toyota Center in Houston to watch game two of the first round of the Western Conference playoffs, in which the Houston Rockets took on the Minnesota Timberwolves

"Kylie Jenner and Travis Scott are currently in the best place they have ever been in their relationship," a source told E! News in early April. "Things really came full circle once Stormi was born and they now have an unbreakable bond. Travis has been fully accepted into the family and everyone is in love with their little family they created."

Kayleigh Roberts Contributor Kayleigh Roberts is the weekend editor at Marie Claire, covering celebrity and entertainment news, from actual royals like Kate Middleton and Meghan Markle to Hollywood royalty, like Katie Holmes and Chrissy Teigen.
Advertisement - Continue Reading Below
More From Celebrity
Prince Harry and Meghan Markle's 53 Cutest Moments
RiRi Was Shocked by the Reaction to Fenty Beauty
Advertisement - Continue Reading Below
Behold: Celebrities Who Dated Normals
Kate Middleton & Michelle Obama Use This $64 Cream
A Full Timeline of Tyler C. & Hannah B.
Blake and Ryan Donate $400K to NY Hospitals
Prince William May Work as an Air Ambulance Pilot
Harry Is Likely to Get U.S. Diplomatic Status
Harry Was Forced to Give Up His Military Titles
Ariana Grande Revealed Her Natural Curls