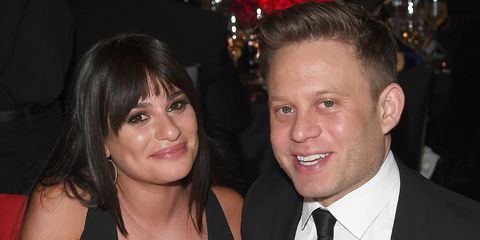 On Saturday, April 28, Lea Michele announced on Instagram that she was engaged. She shared a picture of her holding her newly-ringed finger up to her face with the simple caption, "Yes 💍."

Michele's fiancé is her boyfriend of over a year, Zandy Reich (whose last name is pronounced like "rich"). Here's what you need to know about the man the Glee alum is headed down the aisle with.

1. They were friends first.

Michele and Reich were first linked romantically in July 2017, but they've known each other much longer. The pair sparked dating rumors when they were spotted holding hands after grabbing lunch together in New York City, but a friend of Michele's said their friendship goes way back.

"They’ve been friends for a long time, a few years," a source told People at the time. "Things turned romantic recently and they’re dating now."

2. He's the president of a clothing company.

Reich is the president of AYR—which is pronounced like "air" and stands for "All Year Round." The company focuses on "seasonless essentials" that women can wear, you guessed it, all year round.

"We founded AYR in 2014 because sometimes, the simplest things are the hardest to find. Our studio is based in downtown NYC, our denim is made in sunny LA, and we ship directly to you, everywhere in between," the company's about page says. "Smart, strong women are our inspiration—all year round."

3. He has a business degree.

Reich is a graduate of the University of Pennsylvania and the Wharton School of Business. He earned his finance degree in 2005.

In college, Reich was captain of his school's lacrosse team. The experience shaped him as a leader.

"Not only as a captain, but also as an older guy and one who has seen significant playing time, guys look to me as a role model," Reich told Penn Athletics. "I've learned how to lead by example. Actions speak louder than words, so they look to what I bring to the field and how I handle other situations. But, other people do that for me too. We have all learned how to pick each other up and keep going; how to give that boost we need. We rely on each other."

5. He got Ryan Murphy's stamp of approval.

Michele has always gushed about how supportive Reich is of her career and, in 2017, she told E! News host Giuliana Rancic that he had earned the approval of her longtime collaborator, Ryan Murphy. "When my boyfriend got the seal of approval from Ryan Murphy that was it...sealed the deal," she said.

While he and Michele haven't hidden their relationship (she's shared pictures of their milestones on Instagram, even before the engagement), Reich doesn't appear to be active on any public social media accounts himself.

Kayleigh Roberts Contributor Kayleigh Roberts is the weekend editor at Marie Claire, covering celebrity and entertainment news, from actual royals like Kate Middleton and Meghan Markle to Hollywood royalty, like Katie Holmes and Chrissy Teigen.
This content is created and maintained by a third party, and imported onto this page to help users provide their email addresses. You may be able to find more information about this and similar content at piano.io
Advertisement - Continue Reading Below
More From Celebrity
Britney Spears Dedicated a Message to Her Sons
Meghan's Face "Lights Up" When Harry Walks In
Advertisement - Continue Reading Below
Kate Middleton, Millennial, Wore Skinny Jeans
'Sex and the City' Star Willie Garson Dies Age 57
Princess Eugenie's Son Got to Meet Prince Philip
Ashley Graham Is Having Twin Boys
Gabrielle Union Danced Topless at a Window
Ben Affleck Is "in Awe" of Jennifer Lopez
Princess Beatrice Has Given Birth to a Baby Girl
Gigi Hadid's Mom Shared Sweet Pics of Khai