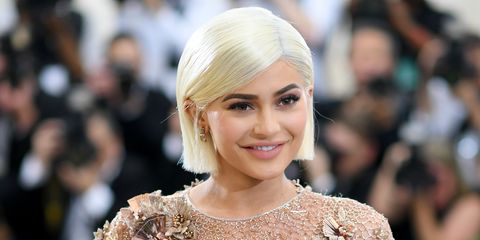 When Kylie Jenner announced that she'd named her daughter Stormi, the reaction was basically "well...okay." It's not that Stormi is a bad name, it's just that fans had spent so long theorizing and making butterfly-themed name guesses (like Mariposa) that Stormi's name seemed to come out of nowhere.

Well, Kylie recently sat down with her sister, Kim Kardashian, for an interview for ES Magazine and Kim asked the question we've all been thinking: "What is the inspiration for Stormi’s name?"

"I really don’t know how we thought of Storm. Her dad insisted it was him, but I feel like it was me," Kylie explained. "And that kind of just stuck with us. And then I didn’t really like just Storm—I didn’t feel like that was her name. So then it became Stormi. And it just stuck."

Even though the name stuck, Kylie maintains that there are other names she might have preferred.

"I feel like there were a lot of other names that I might have even liked better to be honest, but I feel like Stormi picked her own name, like it was just her name," she said.

When Kim asked how being a mom has changed her perspective, Kylie said Stormi has just made everything better.

"I think more about the future because of her. Every time I leave and I’m stressed about leaving her, I’m like, ‘I’m doing it for you.’ Everyone says you change completely when you become a mom, but I really feel the same, just better," she said. "So I don’t know what really has completely changed my world, besides her, of course. But I feel like it’s only gotten better. You’re less selfish—and I actually enjoy changing diapers. It’s really satisfying. To make her clean again. And I don’t know, the whole thing is really… it’s like such an amazing experience."

Kayleigh Roberts Contributor Kayleigh Roberts is the weekend editor at Marie Claire, covering celebrity and entertainment news, from actual royals like Kate Middleton and Meghan Markle to Hollywood royalty, like Katie Holmes and Chrissy Teigen.
This content is created and maintained by a third party, and imported onto this page to help users provide their email addresses. You may be able to find more information about this and similar content at piano.io
Advertisement - Continue Reading Below
More From Celebrity
Will & Kate Are Nervous About George's Future
George Won't Be Forced to Go to Boarding School
Advertisement - Continue Reading Below
Diana Would Have Written a Memoir Too, Friend Says
A Slice of Diana's Actual Wedding Cake Is For Sale
Matt Damon Trolled Ben Affleck and Jennifer Lopez
This Old Video of the Queen Saying "Nah" Is LOL
Diana Had a Secret Message on Her Wedding Shoes
Will's Friends Made "Jibes" About Kate's Mom
William Will Suffer "Worst" from Harry's Memoir
Simone's Boyfriend Sent Her the Sweetest Message