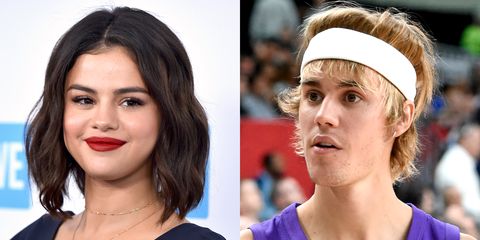 Selena Gomez and Justin Bieber's love story is still going. The chronically on-again, off-again couple are taking time apart, but are reportedly still thinking about each other very much.

This week, Gomez has been teasing the release of her new single, "Back to You," which will appear on the 13 Reasons Why Season 2 soundtrack. In her latest tease for the track, the singer shared a very suggestive caption: "I wanna hold you when I’m not supposed to…"

I wanna hold you when I’m not supposed to...

According to HollywoodLife, Gomez still cares about her ex, and "she thinks about him all the time."

Earlier this week, a source close to the "Bad Liar" singer reportedly told the gossip site, "Selena still cares for Justin very deeply. He will always be her first real love, and she thinks about him all the time....Selena thinks he is one of the most talented guys she has ever known, and she listens to his music almost every day. Even though things between them aren't perfect right now, hearing his songs keeps him close to her heart."

This wouldn't be the first time the exes had sent each other (not-so) secret signals in recent months. In March, just after news of their most recent split, Gomez was photographed wearing a shirt that read "Never Underestimate the Power of a Woman," which many interpreted as a message for Bieber. Then, in April, Bieber posted a slew of workout pics that some thought were intended for Gomez.

If the caption is a lyric from the track and the lyric is about Bieber, it certainly wouldn't be the first time the singers had shared their story through song.