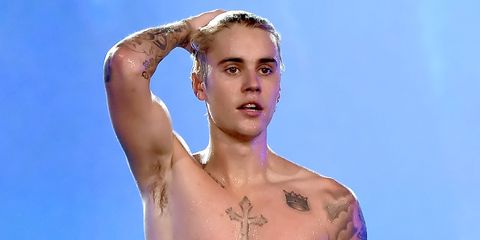 Justin Bieber might have been spotted with multiple women since his very public breakup with Selena Gomez, but that doesn't mean that he's over his ex.

And now, it seems that Bieber is sending Gomez a message on Instagram, because he really wants her to know that he's been working out. Like, a lot.

First, there's this photo of Bieber running. Look at how fast he can go:

Then, he's been playing soccer, and working as part of a team:

And even after the match has ended, he's looking to the future, and thinking about the extra work he needs to do on himself to win Gomez back:

Just last week, the Biebs showed off his tattooed torso, which consists of over a hundred hours of work, which is more than a little impressive:

On Friday, Bieber was spotted leaving a SoulCycle class with a mystery woman, where he'd apparently also been flirting with the receptionist. Prior to that, Bieber had been hanging out with model Baskin Champion, who he took to a Craig David concert. But no-one is convinced that the "Sorry" singer is over his ex, Gomez.

As a source revealed to Entertainment Tonight, Bieber is well aware that "everything he's doing is going to get out." The source also confirmed that, "to be honest, I’m sure there’s a part of him that wants to make Selena a bit jealous! This seems like right out of the old Justin's textbook! He was very manipulative with her emotions the last time and did stuff like this a lot."

And also, he works out!

Related Story
Selena Gomez Has a Message for Justin Bieber
Amy Mackelden Weekend Editor Amy Mackelden is the Weekend Editor at HarpersBAZAAR.com, where she writes about entertainment, celebrity news, beauty, and fashion.
This content is created and maintained by a third party, and imported onto this page to help users provide their email addresses. You may be able to find more information about this and similar content at piano.io
Advertisement - Continue Reading Below
More From Celebrity
Blake Lively Reacts to Gossip Girl's Identity
Harry Said He Didn't Understand Unconscious Bias
Advertisement - Continue Reading Below
Joe Jonas Took a Stroll With Daughter Willa
Lizzo Stuns With Bright Red Hair and Bangs
William and Kate Are Hiring a Live-In Staff Member
Gigi Hadid Says She Voted With Her BB
Will Asked His Uncle to Talk to Harry About Meghan
Why the Queen Denied Meghan's Wedding Tiara Pick
Will & Harry's Reactions to Their Parents' Divorce
LOL, Kelly Ripa Comments on Her Hubby's Bulge 🍆