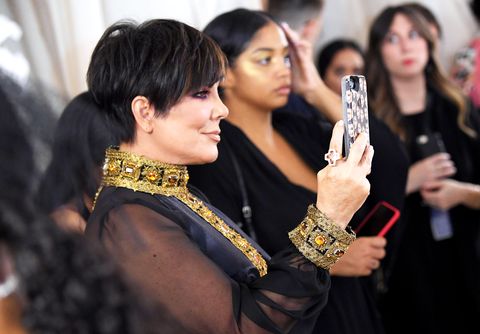 Hundreds of photographers flashed their cameras as Kylie Jenner and Travis Scott made their official red carpet debut as a couple at the 2018 Met Gala Monday night. But one cameraperson in particular beamed with pride as she snapped away: Kris Jenner.

The famous momager could not help herself as she took out her iPhone (with Kimoji Cry Face case, of course) to take a few photos of her youngest daughter walking up the “Heavenly Bodies: Fashion and the Catholic Imagination" carpet in Alexander Wang.

“One of my favorite things to do is stand at the top of the stairs and peek around and see what they’re wearing,” Jenner told E! News, according to People. The moment was captured by a MarieClaire.com reporter in the tweet below.

The proud mama moment was reminiscent of one of the most iconic scenes from Keeping Up With the Kardashians on Season 1. In an episode titled “Birthday Suit," Jenner coined the catchphrase "You're doing amazing, sweetie" when she was taking photos of Kim Kardashian during her nude photoshoot for Playboy. This was in 2007, so Jenner had to rely on a digital camera instead of her iPhone back then.

On Monday, Jenner, who attended the Met Gala in a beautiful black and gold Tommy Hilfiger gown alongside boyfriend Corey Gamble, continued to gush over her daughters on Instagram later into the night. "My Met Gala beauties ❤️ " she captioned a repost of Vogue Magazine's social video.

Kim Kardashian, who attended the Met Gala without husband Kanye West, stunned in a gorgeous gold Versace gown at the annual fashion event. Kendall Jenner chose to take a more unconventional approach by wearing a white jumpsuit created by Virgil Abloh for his brand Off-White.