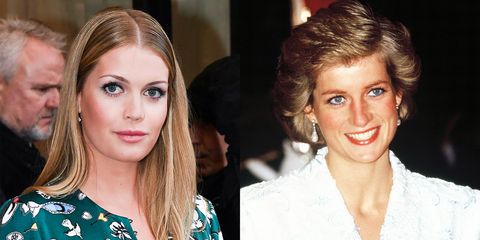 The 27-year-old model wore a gorgeous deep green dress with a matching fascinator. Though she's not in line for the throne, like her cousins Prince William and Prince Harry, Kitty has made quite a name for herself. Here's everything you should know about her.

Kitty Eleanor Spencer was born on December 28, 1990 to Charles Spencer and Victoria Aitken. Charles is the younger brother of Princess Diana, who (as we all know) was married to Prince Charles of Wales until their divorce in 1996. While she's not technically not a born-and-raised royal, her cousins include Prince William and Prince Harry, who are royalty.

Kitty took after her mom, Victoria Aitken, who was also a British fashion model. This year, the Kitty not only starred in Dolce & Gabbana's Spring/ Summer 2018 ad campaign, but she also walked in their Milan Fashion Week show, too.

She's represented by Storm Management, which might sound familiar because the company also works with Kate Moss, Cara Delevingne, Jourdan Dunn, and Cindy Crawford. And when she's not on the runway, she's always sitting front row at designer shows during Fashion Week. Some of her favorite brands include, Dior, Schiaparelli, and, of course, Dolce & Gabbana.

3. She's the oldest of six kids

4. She studied at the University of Cape Town

Before becoming a model, Kitty studied psychology, politics, and English literature at the University of Cape Town in South Africa. She later received her masters in luxury brand management from the European business school at Regent's University London.

In 2016, Kitty was named an ambassador for Centrepoint, a charity which supports homeless people in the United Kingdom. Her first cousin, Prince William is also involved with the same charity, and his mother Princess Di was, too. She's also reportedly a trustee for the military family focused organization called, Give Us Time.

Being a model comes with perks—especially travel ones! Kitty has almost 80,000 followers on Instagram, where she shares her photos abroad. She told Vanity Fair that one of the reasons she loves the Instagram so much is because she can “see what everyone’s up to in Cape Town [back home] and I can see that they’re all sitting in the sun while I’m in the rain."

Related Story
Celebrities Who Are Friends With Royals
Alex Warner
Advertisement - Continue Reading Below
More From Celebrity
Brad Pitt and Jennifer Aniston's Pics, Analyzed
58 Celebrities Who Hated Their Roles
Advertisement - Continue Reading Below
Prince Harry Grins as He Returns to Canada
Meghan Markle Went on a Hike With Archie
Serena Williams Fully Shut Down a Meghan Question
Camilla's Asked Whether She'll Miss the Sussexes
Harry's Speech Sounds Just Like Diana's in 1993
The Queen Is "Very Sad" About Archie Moving
Kim Kardashian Wants to Open Her Own Law Firm
Harry & William Ended Their Feud With Secret Talks