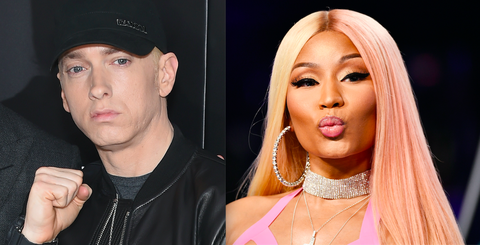 Update, 5/26: Well, sorry to burst anyone's Nicki Minaj-Eminem-heart-shaped balloons, but it looks like the two artists are not dating. A source close to Minaj tells TMZ that she was joking (joking!) when she responded to that comment. So... That's that!

Original post, 5/25: Some WHAT news to kick off your Memorial Day weekend: Nicki Minaj and Eminem are maybe dating.

On Thursday, Minaj played some lines from her new track "Big Bank" with YG, 2 Chainz, and Big Sean on her Instagram. One of the lines (which she called out in the caption): "Told 'em I met Slim Shady, bag the Em/Once he go black, he'll be back again."

One of Minaj's fans asked in the comments, "Are you dating Eminem???" which the singer responded to with a simple, "yes," which doesn't really address the degree of OMG messaged with the three question marks. But fine!
Getty Images

Minaj reportedly broke up with Nas in January 2018 after seven months of dating. According to a source, the two parted ways because of their busy schedules, but "still remain friends." Nas and Minaj started dating after a year of celibacy post Meek Mill breakup. "I’m just chillin‘ right now. I’m celibate. I wanted to go a year without dating any man. I hate men," she told Ellen DeGeneres in May of last year. "I might make an exception to the rule for [Nas] ‘cause he’s so dope."

But anyway, back to the Eminem of it all: It's unclear whether Nicki is kidding (a line in a song doesn't mean anything of course, so the "yes" might not be a serious one). But she and Eminem have known each other for a while—Eminem appeared on Minaj's track "Roman's Revenge" in 2010.

This content is imported from {embed-name}. You may be able to find the same content in another format, or you may be able to find more information, at their web site.
This content is created and maintained by a third party, and imported onto this page to help users provide their email addresses. You may be able to find more information about this and similar content at piano.io
Advertisement - Continue Reading Below
More From Celebrity
Harry Met With the Queen At Least Twice in the U.K
Alexis Is Happy to Be Known As "Serena's Husband"
Advertisement - Continue Reading Below
Marc Anthony Supports J.Lo Amid A-Rod Split
The Palace Just Shared Prince Louis Birthday Pic
Meghan and Harry Talked Every Day During UK Trip
J.Lo Wishes A-Rod's Daughter a Happy Birthday
Irina Shayk Shared a Rare Photo of Her Daughter
John Travolta Talked Dancing With Princess Diana
Meghan Markle and Archie Speak to the Queen
Who Is Alexandria Ocasio-Cortez's Partner?