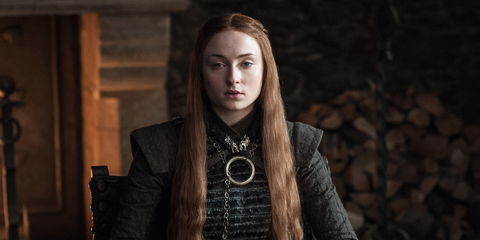 You’re not the only one who's missing Game of Thrones. Sophie Turner just revealed that during her downtime from filming for the show, Turner got a brand-new tattoo in tribute to her character. And it didn’t take GoT fans long to start speculating that actually, rather than just showing loyalty to her onscreen family tree, Sophie's ink could be a major spoiler for Season 8.

Sophie, a.k.a. Sansa Stark, popped up on the Instagram feed of tattoo artist Lauren Winzer earlier this week. Winzer shared an image of Turner's delicate dedication to House Stark.

First tattoo back home! Thank you so much for getting this from me @sophiet ! 🐺 bad ass !

Could this mean that the Starks are set for victory? Pass the closest fur coat, sword and chalice of poisoned wine, please, because I've never been more ready for the final season.

In fairness, the phrase could also just be a throwback to the George R.R. Martin novels, or some past iconic scenes for Sansa. Back in season 7, she told sister Arya: “The lone wolf dies, but the pack survives.”

As if that wasn’t enough to get you and your dragons all fired up: It was also revealed earlier this week that HBO has officially ordered a pilot for a Game of Thrones prequel.

A statement from HBO explained that the new show would be set thousands of years before the events of Game of Thrones, and would follow "the world's descent from the golden Age of Heroes into its darkest hour. From the horrifying secrets of Westeros' history to the true origin of the White Walkers, the mysteries of the East, to the Starks of legend… it's not the story we think we know."

Read Next
15 Of The Craziest 'Game of Thrones' Tattoos
Lucy Wood Contributor, MarieClaire.com Lucy Wood spends most of her time writing about celebby things, reading books, and waiting for the glorious day that she have enough millions for a pet sloth.
This content is created and maintained by a third party, and imported onto this page to help users provide their email addresses. You may be able to find more information about this and similar content at piano.io
Advertisement - Continue Reading Below
More From Celebrity
Michelle Obama + Phoebe Robinson = Serotonin Boost
Gwen and Blake Are Going Through a Rough Patch RN
Advertisement - Continue Reading Below
Screaming at Brad & Jen Reading This Steamy Scene
Gigi Hadid Shared Stunning New Baby Bump Photos
Chrissy Accidentally Revealed the Sex of Her Baby
A Brief History Lesson on Brad and Jen
Taylor Did Her Own Hair and Makeup for the ACMs
The Queen's Private Pain After Diana's Death
Lizzo Sent Cardi B the Sweetest Gift
Chrissy Got Super Candid About Pregnancy