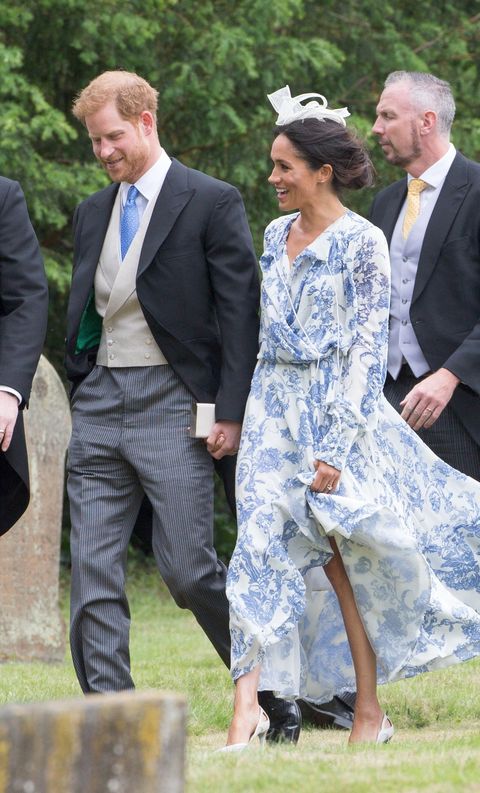 Meghan Markle and Prince Harry are settling into married life and doing the things that married couples do—like spending the weekend attending a cousin's wedding. When you're Prince Harry, of course, the cousin is Celia McCorquodale, niece of the late Princess Diana.

Meghan and Harry were among the guests in attendance as Celia tied the knot with George Woodhouse at St. Andrew and St. Mary's Church in Stoke Rochford, Lincolnshire, on Saturday.

Celia is Harry's first cousin, the daughter of Lady Sarah McCorquodale, Diana's oldest sister (Diana was the fourth of five children). The bride celebrated her big day in a princess-style dress and the Spencer tiara—the one Diana wore when she married Prince Charles 1981.

But, as radiant and amazing as the bride looked and as low-key as Harry and Meghan tried to be, the royal newlyweds just can't help attracting attention everywhere they go. Meghan wore a flowy, loose-fitting, blue floral dress and a white fascinator. She also wore very high heels which, according to the Daily Mail, almost caused a potentially embarrassing stumble.

Per the Daily Mail: "Meghan, 36, narrowly avoided taking a tumble as she teetered in sky-high stilettos at the entrance to a village church. Fortunately Prince Harry, 33, had a firm hold of his wife's hand and helped her steady herself within moments."

It's just one more tangible, real-life example of this couple supporting each other in every conceivable way. Harry wore a dashing suit and a blue tie (which matched Meghan's dress) for the occasion.

Related Story
Shop Every One of Meghan Markle's Best Looks
Kayleigh Roberts Contributor Kayleigh Roberts is the weekend editor at Marie Claire, covering celebrity and entertainment news, from actual royals like Kate Middleton and Meghan Markle to Hollywood royalty, like Katie Holmes and Chrissy Teigen.
This content is created and maintained by a third party, and imported onto this page to help users provide their email addresses. You may be able to find more information about this and similar content at piano.io
Advertisement - Continue Reading Below
More From The Ultimate Guide to the Royal Family
Harry Pranked the Queen by Changing Her Voicemail
The Queen Laid Down the Law at the Royal Wedding
Advertisement - Continue Reading Below
Why Meghan Might Stop Talking About Social Issues
Diana Compared Royal Life to Wedding Day Stress
The Queen Made Prince Philip Quit Smoking
Queen Elizabeth Honored with New Canadian Portrait
Did Meghan Wear Princess Diana's Cartier Watch?
People Are Upset the Queen Didn't Wear a Mask
Kate Middleton Keeps It Simple in a Blue Dress
The Beauty Products Kate Middleton Swears By