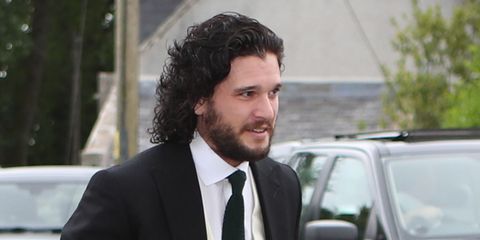 Kit Harington and Rose Leslie are making things official today with a wedding in Scotland. The couple met on the set of Game of Thrones and news of their engagement broke in July 2017.

Harington was photographed arriving at the church for the wedding this morning, looking absolutely dapper in a suit with grey, pin-striped pants and a cream-colored vest.

Although Harington has famously said he'll cut his hair after filming wraps on Game of Thrones, he's still sporting the longer 'do he wears as Jon Snow, meaning his and Leslie's wedding photos will forever immortalize the way they met.

Harington and Leslie reportedly invited about 200 guests to the wedding, including friends, family, and Game of Thrones castmates (Emilia Clarke, Sophie Turner, and Peter Dinklage were all spotted arriving into Aberdeen airport on Friday ahead of the nuptials). The reception will take place at Wardhill Castle, which Leslie's family owns.

"I've moved in with my other best friend, Rose. So, I'm very, very happy and it's going well. She's got all sorts of ideas for the house… I said to her, because she moved into my house, 'Look, darling, this is important that it's our space, that it feels like our space, that you haven't just moved into mine," Harington told James Corden of moving in with Leslie during an interview on The Late Late Show. "Move anything you want around—change anything, chuck anything out. I went to the shops and I came back and I said, 'What did you decide?' And she said, 'We're moving the kitchen downstairs.'"

Kayleigh Roberts Contributor Kayleigh Roberts is the weekend editor at Marie Claire, covering celebrity and entertainment news, from actual royals like Kate Middleton and Meghan Markle to Hollywood royalty, like Katie Holmes and Chrissy Teigen.
This content is created and maintained by a third party, and imported onto this page to help users provide their email addresses. You may be able to find more information about this and similar content at piano.io
Advertisement - Continue Reading Below
More From Celebrity
What Happens on Katie's Season?
Jennifer Lopez Wears Old Bracelet From Ben Affleck
Advertisement - Continue Reading Below
Simone Biles Cheers on MyKayla Skinner
See the Royals Socialize at a 1991 Cocktail Party
Eugenie's Pics from Inside Harry and Meghan's Home
Queen Trolled Tourists Who Didn't Recognize Her
Blake and Ryan Recreated Their First Date on IG
Charles Expertly Ignored Boris Johnson's Snafu
How Kitty Spencer's Wedding Dress Honored Diana
Dolly Parton On the #FreeBritney Movement