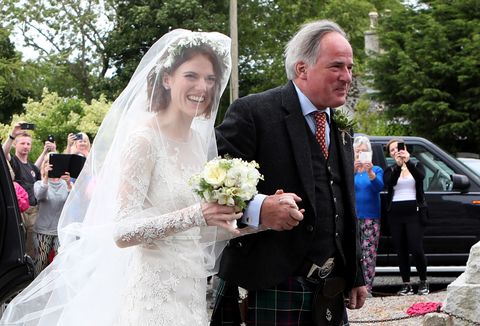 Rose Leslie and Kit Harrington are married! The Game of Thrones stars wed today in Scotland and many fans came out to cheer on their faves in front of the church.

"We are absolutely thrilled for Kit and Rose to be marrying today," Rose's father told Sky News earlier today of the big day.

Rose's floor-length, long-sleeved, lace wedding gown is positively regal—which is fitting, given the wedding's location. The couple are tying the knot in a church, but the reception will be held at Wardhill Castle, which Rose's family just happens to own (NBD, right?).

The couple met on the set of Game of Thrones and played love interests on the show. Costars Sophie Turner, Emilia Clarke, and Peter Dinklage were all sighted arriving into Aberdeen airport on Friday ahead of the wedding. Kit discussed how important it was for the couple to have their Thrones costars at their wedding during an interview on The Jonathan Ross Show in October 2017.

"I rang [the Game of Thrones producer] up and I said, 'I’m getting married and it’s your fault actually'... I think for the final season he is so stressed that he’s reached that peaceful level," Kit said. "I was like, 'You need to factor in a Game of Thrones wedding by the way.' They [the cast] have all got to be there so the whole thing has got to shut down."

Kit was also photographed arriving at the church for the big day, looking dapper in a suit with grey pin-striped pants and a cream-colored vest.

The couple's big day has included several nods to their relationship's origins. They reportedly used Game of Thrones postage stamps with Kit's face (as Jon Snow) on their wedding invitations and are reportedly being married by a monk.

Sally Holmes Editor in Chief Sally is the Editor in Chief of Marie Claire where she oversees coverage of all the things the Marie Claire reader wants to know about, including politics, beauty, fashion, and celebs.
This content is created and maintained by a third party, and imported onto this page to help users provide their email addresses. You may be able to find more information about this and similar content at piano.io
Advertisement - Continue Reading Below
More From Celebrity
Royals Feel "Great Sadness" for Meghan and Harry
How Celebs Are Celebrating Thanksgiving This Year
Advertisement - Continue Reading Below
Kristen Stewart Is "Protective" of Princess Diana
How Meghan & Harry Are Spending Thanksgiving 2020
Obama Ran for President Against Michelle's Wishes
Joe and Sophie Are Planning to Grow Their Family
Gigi Hadid Shared a Selfie With Her Daughter
Diana's Brother Wants 'The Crown' to Warn Viewers
Chrissy Said She's In a "Grief Depression Hole"
Taylor Said Joe Co-Wrote Two Songs on 'Folklore'