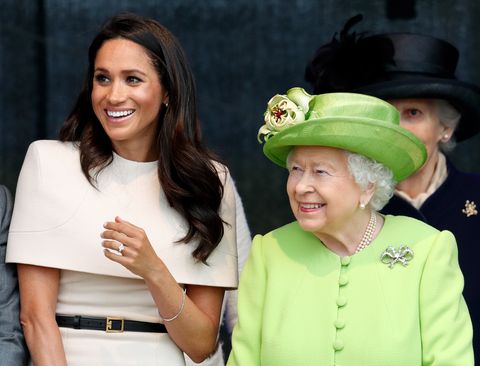 If there were any lingering question on the subject, Meghan Markle has definitely won over her in-laws.

This summer, Meghan and her new husband, Prince Harry, will welcome the young people in the Queen's Young Leaders program to Buckingham Palace. This is a big deal because Queen Elizabeth is handing over her own role in the program to Meghan.

The Young Leaders program honors exceptional young people for their work in Commonwealth nations and, according to Express, hosting the program participants is "said to be a job that has been close to [Queen Elizabeth II's] heart since it started five years ago."

Harry officially became a patron of the program earlier this year and it was clear that Meghan was going to play a role with him in it—but the fact that she's essentially taking over one of the Queen's favorite royal duties is, well, huge.

In April, Harry honored Meghan in his speech about becoming a Commonwealth Youth Ambassador.

"In my new role I will work to support The Queen, my father The Prince of Wales, and my brother William, all of whom know that young people are the answer to the challenges of today," Harry said in a speech to attendees of the Youth Forum, according to Daily Mail royal correspondent Rebecca English. At the time, Harry hinted that Meghan would taken on a role in the organization as well. "I am also incredibly grateful that the woman I am about to marry, Meghan, will be joining me in this work, of which she too is hugely excited to take part in."

Meghan and the Queen were photographed giggling like longtime BFFs at their first royal event together, so it's no surprise Elizabeth is continuing to show her support for her newest granddaughter-in-law.

Kayleigh Roberts Contributor Kayleigh Roberts is the weekend editor at Marie Claire, covering celebrity and entertainment news, from actual royals like Kate Middleton and Meghan Markle to Hollywood royalty, like Katie Holmes and Chrissy Teigen.
This content is created and maintained by a third party, and imported onto this page to help users provide their email addresses. You may be able to find more information about this and similar content at piano.io
Advertisement - Continue Reading Below
More From The Ultimate Guide to the Royal Family
This Old Video of the Queen Saying "Nah" Is LOL
Diana Had a Secret Message on Her Wedding Shoes
Advertisement - Continue Reading Below
Will's Friends Made "Jibes" About Kate's Mom
William Will Suffer "Worst" from Harry's Memoir
Harry's Friends Don't Want to Be in His Memoir
Will & Kate's Modern Approach to Raising George
Why Harry's Memoir Release Date Has Upset People
The Royals Are Worried About Prince Harry's Memoir
Harry Is Putting the Queen in a Difficult Position
Are Will & Kate Sending a Message to Harry & Meg?