The world has fallen in love with Prince Harry's new wife Meghan Markle for a ton of different reasons—but her kind nature, sense of humor and killer wardrobe have contributed to us all now really wanting to be her BFF. But what is it actually like to hang out with an off-duty Duchess of Sussex IRL? Markle’s IRL friend Bryony Gordon has revealed all.

Appearing on British show Loose Women earlier this week, Gordon was quizzed on her close relationship with Meghan, as well as Prince Harry when he’s just Harry-At-Home. Speaking about life behind the scenes with the royals, Gordon said: “It’s like chatting with a mate on the sofa with a cup of tea.”

Bryony, who has previously interviewed Harry about his mental health for her podcast Mad World, went on to admit that her friendly nickname for the Prince hadn’t exactly gone down too well, but he’d reluctantly agreed that she could call him “Hazza” anyway. What a guy.

But more about BFF Meghan. Bryony said that the former actress is still “completely normal” despite her new elevated status in the royal family, and that they’d recently headed to a normal, public restaurant for lunch together. “She is beautiful, graceful, lovely,” she said about the Duchess.

Recalling their recent girly date together, Bryony remembered: “We spoke about yoga, she loves running. She offered me some of her monkfish.”

Sigh. Enjoy your loser lunch today with absolutely no royalty, yoga or monkfish involved. The rest of us can only dream. 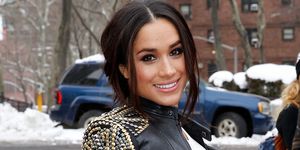 Why Meghan Markle Won't Be at Wimbledon
Lucy Wood Contributor, MarieClaire.com Lucy Wood spends most of her time writing about celebby things, reading books, and waiting for the glorious day that she have enough millions for a pet sloth.
Advertisement - Continue Reading Below
More From Celebrity
Rih Was Shocked by the Reaction to Fenty Beauty
Behold: Celebrities Who Dated Normals
Advertisement - Continue Reading Below
Kate Middleton & Michelle Obama Use This $64 Cream
A Full Timeline of Tyler C. & Hannah B.
Blake and Ryan Donate $400K to NY Hospitals
Prince William May Work as an Air Ambulance Pilot
Harry Is Likely to Get U.S. Diplomatic Status
Harry Was Forced to Give Up His Military Titles
Ariana Grande Revealed Her Natural Curls
Fans Love This Accident Meme of Queen Elizabeth