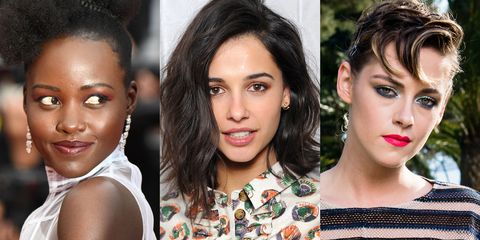 Considering this year has already blessed my nostalgia-loving heart with a lineup of really solid reboots—Legally Blonde 3! A Clueless musical!—I wasn't eagerly waiting for much more. But as soon as I saw the rumored cast of the Charlie's Angels remake, I couldn't help but get really, damn excited. Kristen Stewart and Naomi Scott (who killed it as Pink Ranger in 2017's Power Rangers movie) are rumored to be in talks for two of the roles, and Lupita Nyong'o is said to be in negotiations as well.

Pitch Perfect 3's Elizabeth Banks is set to direct and star as Bosley (the angels' liaison with Charlie who has historically been played by a man). While casting is still in the works, the film is rumored to hit theaters in the summer of 2019.

Charlie's Angels originally aired as a TV show that spanned five seasons from 1976 to 1981. Lucy Liu, Drew Barrymore and Cameron Diaz starred in the first movie adaptation of the film in 2000, which was followed by sequel Charlie's Angles: Full Throttle in 2003. There was also a short-lived T.V. reboot in 2011 starring Minka Kelly and Annie Ilonzeh.

I for one am praying that Nyong'o seals the deal—the badass energy she brought to Black Panther would make for a pretty epic Angel.

This content is imported from Giphy. You may be able to find the same content in another format, or you may be able to find more information, at their web site.
Related Story
A Movie About Wakanda's Women Could Happen
Ruby Buddemeyer Ruby was the beauty editor at Cosmopolitan, where she covered beauty across print and digital.
This content is created and maintained by a third party, and imported onto this page to help users provide their email addresses. You may be able to find more information about this and similar content at piano.io
Advertisement - Continue Reading Below
More From Celebrity
Lilibet May Be Christened in California After All
The Sweet Family Photos in Prince William's Office
Advertisement - Continue Reading Below
Royal Family Members Can’t Eat Pasta or Potatoes
Prince George Is an Environmentalist, Too
Salma Hayek Looked Super Hot in Leopard Print
Britney Spears Just Trolled Justin Timberlake
Billie Eilish Says Kate and Will Were "So Normal"
Prince William Slammed Billionaires' "Space Race"
Lady Gaga Draped Herself in $100 Bills
Kate Middleton Wore Green to Celebrate Nature