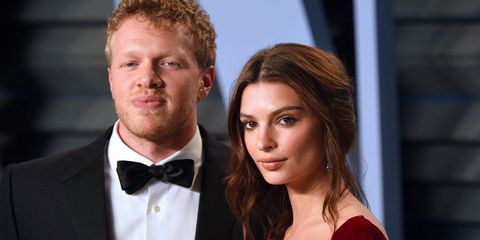 Emily Ratajkowski does things her own way. Case in point: The model-slash-actress married producer Sebastian Bear-McClard in a private court house ceremony last February while wearing a mustard-yellow Zara suit and a black hat. And although she's been sporting a simple, gold band since tying the knot, Ratajkowski took to Instagram last night to debut a new, massive engagement ring—because, why not?!

In a close-up image on Ratajkowski's Instagram, it appears that the couple decided on a double-stone ring: the left is a square-cut diamond and the right is a teardrop. The ring sits directly below Ratajkowski's wedding band, which the couple had custom-made 24 hours before their spur-of-the-moment wedding.

“He proposed to me at Minetta Tavern and he didn’t have a ring, so I was like mmm, nah,” she said during an appearance on The Tonight Show Starring Jimmy Fallon. “And then he took the paper clip that the bill was paid with and made me a ring, which I actually thought was really romantic.”

After leaving the restaurant, the couple walked to New York's China Town and bought an ounce of gold, which they then took to a studio in Midtown to have melted into their bands. "They were supposed to be temporary rings but now I’m very attached and I really don’t want to get rid of it," she told Fallon.

Considering the untraditional nature of Ratajkowski and Bear-McClard's engagement, it's no surprise the couple has taken a unique approach to their rings. But just because she seems extremely happy, doesn't mean Ratajkowski hasn't received backlash. "People came after my marriage, like, ‘Wow. I give it three weeks.’ I’m like, ‘What?'" she told Marie Claire after announcing her marriage.

"No one can take women seriously on any choices that they make, especially if they’re unique to them and they don’t play into the way we think women should get married. It's a constant writing-off."