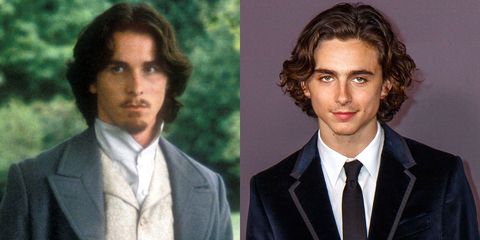 According to Variety, Greta Gerwig is the woman bringing Louisa May Alcott's CLASSIC tale of the March sisters—Jo, Meg, Beth (sob), and Amy (ugh)—to the big screen. And, if casting rumors prove to be true, this fam is going to be stacked.

Emma Stone, Meryl Streep (!!!!!!!!!!!!!!!!!!!!!), and Florence Pugh are all said to be in talks for the film as well as Gerwig's Lady Bird stars Timothée Chalamet and Saoirse Ronan. Basically, it's all genius, inspired, exciting beyond belief, and probably has already won 15 Academy Awards, but(!) the big question is who will play whom?

Meryl is likely Marmee a.k.a Mrs. March, but she could also be an inspired choice for Aunt March—you know, the sisters' rather scary, rich old aunt who takes Amy with her to Paris instead of Jo, which, rude! I know almost nothing about Florence Pugh, but she's 22 and, #noshade, looks to have an air of Amy about her. Saoirse Ronan, I'm guessing is Meg, and Emma Stone is the main character, Jo. According to Variety, the role of Beth has not been cast yet because, well, you know.

But the one obvious, perfect, inspired piece of casting: Timmy Chalamet as Laurie. Has anything ever made more sense?

This news is shockingly brilliant!
Giphy

Honestly, he doesn't even have to change his hair! There has never been a more Laurie Laurie than Christian Bale, but I think Timotheé is up for the challenge.

Anyway, this is incredibly exciting! I can't wait for Emma Stone to sell her hair! To see who plays Professor Behr! MERYL! Watch the trailer for the 1994 film (with its own magnificent cast of Winona Ryder, Susan Sarandon, Kirsten Dunst, Claire Danes, and the aforementioned Christian Bale), for a healthy dose of nostalgia:

This content is imported from YouTube. You may be able to find the same content in another format, or you may be able to find more information, at their web site.
This content is created and maintained by a third party, and imported onto this page to help users provide their email addresses. You may be able to find more information about this and similar content at piano.io
Advertisement - Continue Reading Below
More From Culture
'Bachelor In Paradise' 2021: Everything We Know
'Life After Happy Face' Is Your Fave New Podcast
Advertisement - Continue Reading Below
Will There Be a Season 3 of 'Virgin River'?
The New Horror Movies That'll Leave You Breathless
Zendaya Shared a Teaser of 'Euphoria' Season 2
Listen to the Best New Love Songs of 2021 (So Far)
Meet the Cast of 'Too Hot to Handle' Season 2
Meet the Cast of Katie's 'Bachelorette' Season
Simone Biles: "Don't Be Ashamed of Being Great"
68 Movies That Are Just Fully About Sex