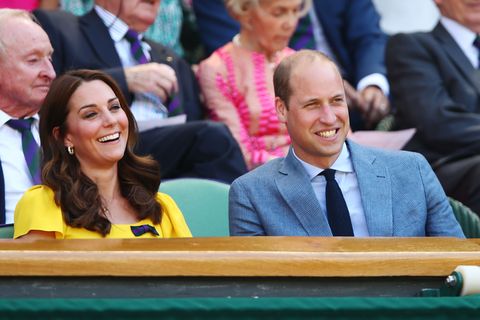 Royals command attention wherever they go, but Kate Middleton guaranteed that all eyes would be on her (and only on her) at Wimbledon today. Kate attended the tournament again today, this time with her husband, Prince William. As the official royal patron of Wimbledon, Kate attended both the Ladies' Singles and Gentlemen's Singles Finals.

Kate opted for a head-turning, bright canary yellow dress by Dolce & Gabbana for her second day at the tournament. You can practically hear the fitted, knee-length dress with flowy short sleeves screaming "summer":

Kate and Will had an amazing date at Wimbledon, taking a break from the grueling (but rewarding) duties of parenting a newborn for the occasion. The couple appeared to very much enjoy their day date, and were photographed talking and laughing hysterically in the stands. The pictures are frame-worthy:

Yesterday, Kate attended the Ladies' Singles Finals with her new sister-in-law, Meghan Markle. The outing was Kate and Meghan's first solo engagement and they appeared to have a great time.

This weekend marks one of the Duchess of Cambridge's first public appearances since giving birth to Prince Louis in April. Since welcoming Louis, Kate has opted out of most potential appearances, except for really big events like Prince Harry and Meghan's wedding, and Trooping the Colour). This might mark the end of Kate's unofficial maternity leave.