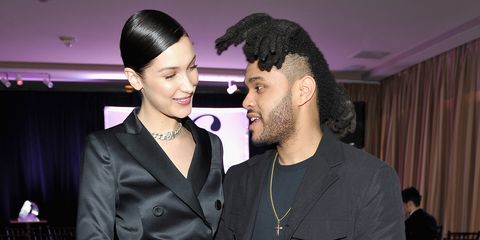 It's definitely starting to look like Bella Hadid and The Weeknd (whose real name is Abel Tesfaye) are back together. Okay, so it actually started to look like that in May, when the former/maybe current again couple were spotted making out at a party in France during the Cannes Film Festival.

Whether they're applying labels or not, Bella and Abel are definitely rekindling their romance in one way or another.

"You could feel the energy between them and there was no doubt they were together. They were whispering and holding hands while talking. People were coming over to say hello, but they were focused on each other and never got too far away from one another," a source told E! News of Bella and Abel's PDA at the Magnum party at Cannes.

Now, after several sightings this summer, Bella and Abel are *this* close to Instagram official. First, Abel posted a video to his Instagram Story documenting his date night with Bella. The couple took in a show at the Robot Restaurant, a dinner theater in Tokyo, according to E! News.

In the clip, Bella is seen smiling and laughing at the show as the actors in robot costumes pretend to battle on stage.

Abel also brought Bella to his grid, tagging her as the photographer in a picture with friends.

This is just the latest in a series of public dates the couple has gone on this summer. After their Cannes PDA, the maybe couple went on a dinner date in Paris and hung out at Abel's home in Los Angeles. On Friday, fans spotted the model and the singer out on a date in Tokyo and shared video proof of the outing on Instagram.