Sure, it’s unlikely that any trio will ever be as badass as Cameron Diaz, Drew Barrymore, and Lucy Liu, but three new ladies are sure as hell going to give it a try. The official trio for the upcoming Charlie’s Angels remake has been confirmed, so say good morning to your new Angels: Kristen Stewart, Naomi Scott, and Ella Balinska.

Elizabeth Banks’ reboot of the franchise has been buzzy amongst critics and fans, with an initial casting plan penciling KStew in for a lead role alongside Lupita Nyong’o. Lupita unfortunately didn’t make the final cut (honestly, a tragedy) for the iconic lineup, but the Twilight star is still in perfectly badass company. Although lesser-known right now, her partners in crime-fighting are both British and set to become huge stars.

Scott’s part in Charlie’s Angels is her latest in a stream of hugely exciting roles, having previously been announced as Jasmine in the live action Aladdin remake, as well as taking on the Pink Power Ranger Kimberley in 2017’s Power Rangers. Meanwhile, Charlie’s Angels is Balinska’s big-screen break, having so far built her resume on television work in the U.K.

Back in February, Stewart hinted that she was ready and waiting to practice her karate chops. She told Entertainment Tonight: “I’m an enormous fan of Liz Banks and I think that she’s the perfect person to tell that story in this era. I would back her absolutely all the way. The movie should still be fun, but if you ground it and make it about women that really know how to help each other, it’ll be perfect to release now. We’re all together and strong.”

Alongside her newly-confirmed trio of Angels, director Banks will succeed David Doyle, Ramon Rodriguez, and Bill Murray in the iconic Bosley role, with a 2018-ready gender flip.

The rebooted Charlie’s Angels is due for release in September 2019, so prepare your high kicks in advance. 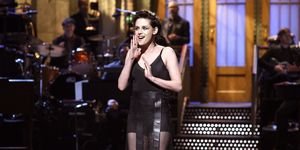 Why Kristen Stewart Declared She's "Like, So Gay"
Lucy Wood Contributor, MarieClaire.com Lucy Wood spends most of her time writing about celebby things, reading books, and waiting for the glorious day that she have enough millions for a pet sloth.
This content is created and maintained by a third party, and imported onto this page to help users provide their email addresses. You may be able to find more information about this and similar content at piano.io
Advertisement - Continue Reading Below
More From Celebrity
Iconic Party Photos From the Past
The Best TV and Movie Wedding Dresses of All Time
Advertisement - Continue Reading Below
40 Celebrity Sisters Who Look So Much Alike
40 Rare Photos of Grace Kelly Through the Years
A Look at Royal Family Portraits Through the Years
The 50 Most Popular Episodes of ‘Friends,’ Ranked