So what exactly does your average Saturday night involve when you’re members of the royal family? Counting stacks of diamonds, drinking liquid gold champagne, booking last minute flights to the Maldives? Sure, probably all of the above—but it turns out that Meghan Markle and Prince Harry do all of the above while watching total trash realty television shows. See, they’re just like the rest of us normals!

The Duke and Duchess of Sussex have a schedule that seemingly never stops, with constant public appearances and royal duties to fulfill through the day, but on the rare occasion that they do manage to spend a free evening together, they apparently love to round off a busy day with an episode of The Voice Kids. Yeah, I had my hopes up that it was The Bachelorette too, but still.

Speaking on British morning chat show Lorraine, a former finalist of the children’s singing competition, Donel Mangena, spilled all about the time that he met Meghan and Harry, and they kind of freaked out. Having hung out with the royal couple backstage at the Queen's 92nd birthday celebrations at London's Royal Albert Hall in April, 16-year-old Mangena said that Meghan basically fangirled over him.

Recalling the moment that they visited his dressing room to say hello, the young singer said: "Harry and Meghan walked in and I expected a handshake, but Meghan screamed my name and ran over to give me a hug.” Donel also proudly revealed that Harry had told him "our money's on you," to which he jokingly replied: "Thanks Harry, no pressure.”

The thought of Meghan and Harry curled up on the couch in pajamas, sharing a bag of microwave popcorn, enjoying a children’s reality TV singing show and calling in to vote for their favorites is almost too much joy to handle. 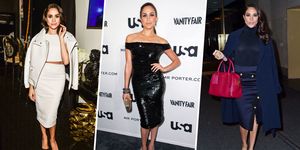 Meghan Markle's 67 Best Looks Ever
Lucy Wood Contributor, MarieClaire.com Lucy Wood spends most of her time writing about celebby things, reading books, and waiting for the glorious day that she have enough millions for a pet sloth.
Advertisement - Continue Reading Below
More From Celebrity
Khloé Kardashian Is Being Trolled Over Febreze
A 'Friends' Reunion Special Is Coming to HBO Max
Advertisement - Continue Reading Below
Katie Holmes Is in Head-to-Toe Chloé at Their Show
Ariel Winter Now Has Strawberry Blonde Hair
46 Stars Who Dated Before They Were Famous
Every Easter Egg in Taylor Swift's 'The Man' Video
Kate Middleton Does Some Sports in $38 Sneakers
Sarah Hyland Defends Ariel Winter’s Dress on Insta
Prince Harry Wants to Go by Just "Harry" Now
Ashley Graham Talked Breast Pumping in an Uber