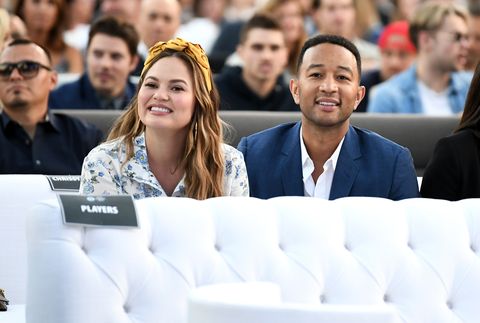 Here's something you didn't know for your Monday: Chrissy Teigen stormed out of now-hubby John Legend's music video set 10 years ago. On Twitter, the social media darling explained: Chrissy was jealous as she watched John laugh with the woman in the video, she was 22, she was watching the set like a "psychotic tarantula hawk," and she fully owns up to all of it, one tweet at a time.

The whole thing started with MEFeater Magazine's tweet congratulating John Legend and André 3000 on the ten-year anniversary of their music video, "Green Light." So, Chrissy Teigen posted a tweet with her side of the story: "Fun fact: I had a jealousy-fueled meltdown visiting this video set and made an asshole out of myself to a large group of people."

Fun fact, I had a jealously-fueled meltdown visiting this video set and made an asshole out of myself to a large group of people. https://t.co/SiE3h9aisY

The teasing just continued—Chrissy, just tell us the story! She wrote, in a follow-up Tweet, "Oh, you want to know more, do you?"

Oh you want to know more, do you? Let me try to remember. 10 years is a long time!

She refreshed with John. Thank you, John, for speeding things up. We want to hear the rest.

Ok after a brief refresh with john, I have pieced together small bits of information

And she gives a little detail. "It began with our friends...talking about how BEAAAAAAUUUUTIFUL some of the women were..."

it began with our friends (john’s managers and co-writers and a couple others) talking about how BEAAAAAAUUUUTIFUL some of the women were...

Chrissy thought those "friends" were trying to rile her up, get her jealous. "THEY WERE DEFINITELY RILING ME UP," she adds.

I was watching the monitor with all the guys and someone, I can’t remember who, said, “ooooooo look at that girl with john ooooooooo!” so I watched the monitor like a psychotic (tarantula) hawk and in my mind, oh he was in trouble

Now, let us diverge for a second. Chrissy and John met on a music video set. In 2007. Chrissy was that girl. "I know how this shit works!" she writes.

Keep in mind john and I met on a video. I was that girl! I know how this shit works!

Chrissy's Twitter story-timeline isn't over, though. Now we hear about the conversation that she imagined was occurring as John and the girl in the video laughed together.

He probably laughed at something she said. And in my mind it was some GRAND conversation I was conjuring up. They were probably just talking about craft services honestly but in my mind she was like “hey we should bone” and he was like “haha fuck yeah!”

Here we hit the climax. Alan Ferguson (he has directed music videos with Solange Knowles, Beyoncé, Jay-Z, Katy Perry, and many more) watched as Chrissy stormed out sobbing.

A few more shoulder touches and laughs with her later, I lost it. Anger turned to sobbing turned to fleeing the set and getting a hotel room. The director (ALAN FERGUSON!) was baffled. Everyone was.

But now we rejoice in the light that is Chrissy Teigen and John Legend's relationship. "I'm better now," says Chrissy. "BUT DON'T TEST ME."

Anyhow I wish more happened but no. I was just a jealous, angry 22 year old. I’m better now. BUT DONT TEST ME

Don't test her. We can't imagine a world without them.