It’s clear to see that Ariana Grande and Pete Davidson are very, very in love. Like, romantic ballad, birdsong, cotton candy-scattered rose petals levels of being in love. So that’s what makes it all the more confusing to ldzfn that the SNL comedian has apparently covered up the tattoo that he had inked in tribute to his fiancé.

Right back at the start of their relationship, all those eight weeks ago, Davidson had the iconic “Dangerous Woman” bunny ears tattooed behind his ear, and the whole thing was adorable. But, in an unexpected plot twist, Pete was this week spotted in LA with the jet-black tattoo seemingly vanished.

Of course, it didn’t take long for Ariana Grande fans to hear the fairly alarming news and assume the worst. Is the wedding already cancelled? Has the summer of love 2018 come to a tragic end? Do we have to rely on Justin Bieber and Hailey Baldwin to keep the dream alive? Don’t panic, it’s not quite reached that state of chaos just yet.

Luckily, TMZ reports that the missing tattoo is pretty easily explained. Pete is currently covering up the recognizable ink with makeup, for an acting role that he’s currently filming with Machine Gun Kelly. To be fair, it probably would kill the movie a little if his character was discovered to be an Arianator.

Ariana was also keen to make it clearer earlier this week that she’s still super serious about spending her life with her fiance, and that this isn’t just a phase. The track “Pete” on her upcoming album has now been retitled to “Pete Davidson,” and the singer explained the decision to fans on Twitter.

i like the way it looks
i love his name and i love him
music lasts forever. it’ll outlive any tattoo, any memory, any anything, even myself so i want my love for him and how i feel to be a part of that

“I like the way it looks,” Ariana wrote. “I love his name and I love him. Music lasts forever. It’ll outlive any tattoo, any memory, anything, even myself so I want my love for him and how I feel to be a part of that.”

Plus, it clears up any confusion that it could be a song about a Pete who works in her local Burger King. Thank goodness. 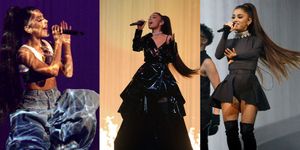 Ariana Grande's Dangerous Woman Tour Best Looks
Lucy Wood Contributor Lucy Wood spends most of her time writing about celebby things, reading books, and waiting for the glorious day that she have enough millions for a pet sloth.
This content is created and maintained by a third party, and imported onto this page to help users provide their email addresses. You may be able to find more information about this and similar content at piano.io
Advertisement - Continue Reading Below
More From Celebrity
Jennifer Aniston Answered Bizarre Fan Questions
Prince Charles "Really Wants to Meet" Lilibet
Advertisement - Continue Reading Below
Britney Spears Deleted Her Instagram Account
Megan Fox Won't Be Told "What a Woman Should Be"
Jennifer Garner Shared an Emotional Message on IG
Travis Scott Discussed His Parenting Style
Kanye West Unfollowed Kim Kardashian on Instagram
Kate Hudson Is Engaged to Danny Fujikawa
J.Lo & Ben Affleck Kiss in Masks at the Met Gala
Who Is Alexandria Ocasio-Cortez's Partner?