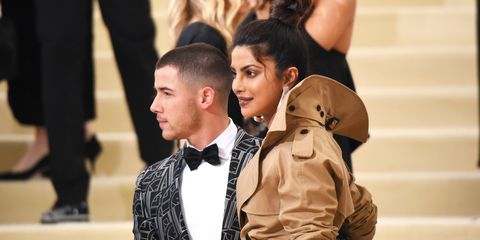 With the surprise celebrity engagements rolling in on some kind of constant, romantic conveyor belt, the summer of 2018 might feel like one big daydream. Did it ever even really happen? Ariana and Pete have disappeared on the down low while Hailey and Justin are just crying on street corners—but Priyanka Chopra and Nick Jonas are here to remind you that their whirlwind romance is well and truly going ahead. The couple, who are thought to have made it official on Priyanka's 37th birthday, will reportedly host an engagement party together this weekend. Oh, and no big deal, but it’s happening in Mumbai.

Nick and Priyanka will apparently introduce their full families to each other for the first time at the upcoming engagement celebration, to be held in the city where the actress is currently filming for upcoming movie, The Sky Is Pink. Priyanka was reportedly keen to plan an event for all of her family and loved ones, so Nick and his entire family also will be flying out to India to join them for the special occasion. The Jonas Brothers take India? That’s a show I would have watched in 2007.

Explaining why the choice of date is quite significant, an insider said: "Priyanka has sent out messages to close friends and family members to set aside time on August 18 for a party." The source told DNAIndia, reported by MailOnline: “It’s exactly a month after her birthday and those close to the Quantico actress feel that she may make an official announcement about her relationship status at the bash."

So far, the couple have kept fans waiting for the "official announcement" moment, but surely you don't throw a family party half way across the world for nothing?

Related Story
Priyanka Chopra Says Goodbye to 'Quantico'
Lucy Wood Contributor Lucy Wood spends most of her time writing about celebby things, reading books, and waiting for the glorious day that she have enough millions for a pet sloth.
This content is created and maintained by a third party, and imported onto this page to help users provide their email addresses. You may be able to find more information about this and similar content at piano.io
Advertisement - Continue Reading Below
More From Celebrity
Harry Met With the Queen At Least Twice in the U.K
Alexis Is Happy to Be Known As "Serena's Husband"
Advertisement - Continue Reading Below
Marc Anthony Supports J.Lo Amid A-Rod Split
The Palace Just Shared Prince Louis Birthday Pic
Meghan and Harry Talked Every Day During UK Trip
J.Lo Wishes A-Rod's Daughter a Happy Birthday
Irina Shayk Shared a Rare Photo of Her Daughter
John Travolta Talked Dancing With Princess Diana
Meghan Markle and Archie Speak to the Queen
Who Is Alexandria Ocasio-Cortez's Partner?