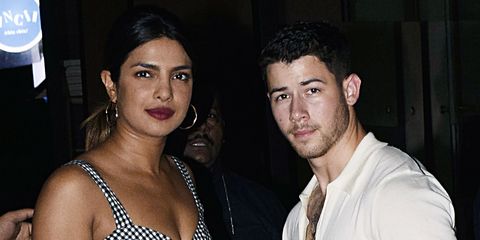 After two whirlwind months of dating, Nick Jonas and Priyanka Chopra are reportedly engaged. The honeymoon period of the relationship is still going strong and Priyanka and Nick are in the "support each other via Instagram Stories and heart emojis" stage of the relationship (it's a thing — cultural anthropologists of the future will write about it).

This weekend, Nick is in Singapore performing as part of MTV Asia's Hyperplay lineup, an appearance he made a point of teasing on his own Instagram Story.

Priyanka has apparently traveled to Singapore with Nick to support him during the show, going all in on her role as supportive girlfriend/possible fiancée. She also proudly promoted Nick's set, posting an Instagram Story of the lineup when he was next up to perform, emblazoned with a heart emoji and the "sound on" symbol.

Priyanka isn't a stay-backstage-girlfriend though. She's a stand-in-the-front-row-of-the-crowd-dancing girlfriend. Fans at the show quickly spotted the actress cheering her love on at the show, and the expected outpouring of Twitter love ensued.

"Priyanka Chopra being a supportive girlfriend to Nick Jonas is so cute," one Twitter user wrote along with a photo of Priyanka looking lovingly on as Nick does his thing on stage.

priyanka chopra being a supportive girlfriend to nick jonas is so cute pic.twitter.com/gIi7xrGIKn

Nick and Priyanka have been making the most of their time in Singapore. On Saturday night, fans spotted the couple engaging in some sweet PDA while out at a nightclub. And yeah, there's video. Praise Twitter.

Nick and Priyanka were first photographed together at the Met Gala in 2017, but didn't begin dating until May of this year. Nick reported popped the question at Priyanka's 36th birthday dinner in London.

Kayleigh Roberts Contributor Kayleigh Roberts is the weekend editor at Marie Claire, covering celebrity and entertainment news, from actual royals like Kate Middleton and Meghan Markle to Hollywood royalty, like Katie Holmes and Chrissy Teigen.
This content is created and maintained by a third party, and imported onto this page to help users provide their email addresses. You may be able to find more information about this and similar content at piano.io
Advertisement - Continue Reading Below
More From Celebrity
J.Lo Reunites with A-Rod for Some Instagram PDA
Shop Meghan's Stunning $30 Summer Dress
Advertisement - Continue Reading Below
Duchess Kate Wears a Sleek Green Blazer
Meghan & Harry Update Archewell Website
Will Is in the Dark About Sussex/Oprah Interview
Oprah Says Her Sussex Interview Is Her Best Ever
Chelsea Handler Skied Naked for Her 46th Birthday
How Kristen Stewart Is Prepping to Play Diana
How to Make the Queen's Favorite Cocktail
The Queen Told Harry to Uphold His Family Values