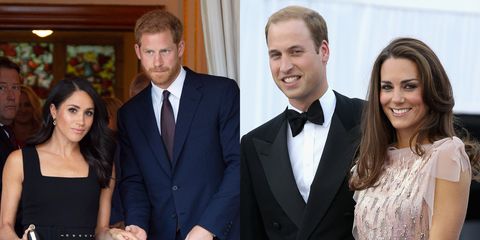 Getty Images
Clive MasonGetty Images
On August 27, 2018, Meghan Markle will officially have been a member of the British royal family for 100 days. Crazy right? It feels like just yesterday that we were all waking up ungodly early to watch marry Prince Harry in a true fairytale wedding.

As we look back on Meghan's first 100 days as a royal, we can't help but think back to the last time an outsider joined the Windsor clan: When Kate Middleton married Prince William in 2011. Here's a look at how Meghan and Kate's first hundred days in the monarchy compared.

Kate didn't make a formal public appearance for almost a month after her April 29th wedding to Prince William. The newlyweds resurfaced in late May for an audience with Barack and Michelle Obama.

Unlike Kate and Will, Meghan and Harry didn't take off for a honeymoon right away after their wedding. As a result, Meghan's first public appearance as a member of the royal family was just days after her wedding, at Prince Charles' 70th Birthday Patronage Celebration.

Kate stepped out with top hat-clad William and Harry in early June, about a month and a half after her wedding, for Investec Derby Day at the Investec Derby Festival at Epsom Downs Racecourse.

A month to the day after her wedding to Prince Harry, Meghan attended the Royal Ascot Day 1 at Ascot Racecourse, meaning she hit this milestone faster than Kate.

Kate wore a white jacket and black fascinator for her first official Trooping the Colour parade.

Meghan turned heads in an off-the-shoulder blush dress and matching hat for her first Trooping the Colour, which happened just a couple of weeks after her wedding.

The first wedding Kate attended after her own was the wedding of Sam Waley-Cohen and Annabel Ballin at St. Michael and All Angels church in early June 2011. She attended with her sister, Pippa Middleton.

Less than a month after her own wedding, Meghan attended the wedding of Celia McCorquodale with Prince Harry. She wore a stunning Oscar de la Renta dress for the occasion.

Exactly two months after her wedding, Kate attended Wimbledon for the first time as a royal alongside Prince William.

Unlike Kate, Meghan did not bring her husband along for her first Wimbledon outing as a royal. Instead, she went with her sister-in-law.

In late June, a little over two months after her wedding, Kate joined William on a trip to Canada and the United States for an official royal tour.

Meghan got around to her first international trip as a royal a little quicker than Kate, traveling to Ireland with Prince Harry about a month and a half after her wedding. Her and Harry's first official tour is scheduled for October of this year, when they'll visit Australia and New Zealand.

During their trip to the United States, Will and Kate shared a kiss at the Foundation Polo Challenge at the Santa Barbara Polo and Racquet Club. This was 71 days into their marriage.

Meghan and Harry shared an almost-identical polo kiss of their own at the Sentebale ISPS Handa Polo Cup at the Royal County of Berkshire Polo Club. Their kiss was 68 days into wedded bliss, however, meaning yet again, they were quicker to the punch than Will and Kate.