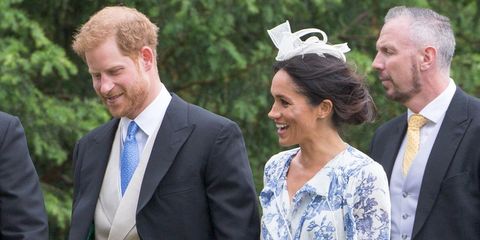 Prince Harry and Meghan Markle spent the weekend doing a very normal, married couple thing: attending the wedding of one of Harry's cousins. Of course, since Harry is royalty, the family wedding was not-so-low-key.

Meghan and Harry were guests at Celia McCorquodale's, niece of the late Princess Diana, wedding to George Woodhouse at St. Andrew and St. Mary's Church in Stoke Rochford, Lincolnshire, on Saturday.

The Duchess of Sussex wore a blue and white, floral wrap dress from Oscar de la Renta for the occasion. The dress retails for $5,490, if you happen to have thousands of dollars lying around that you don't know what to do with. Meghan accessorized the look with a $49 fascinator from Marks & Spencer, the customary hat at royal weddings.

The bride is Harry's first cousin, the daughter of Princess Diana's oldest sister, Lady Sarah McCorquodale. Celia looked stunning as well in a princess-style dress with a lace bodice and a full-length veil, which was held in place by the iconic Spencer tiara—the same exact tiara Diana wore when she walked down the aisle with Prince Charles 1981.

Harry and Meghan attended the wedding just under a month after they exchanged vows themselves at St. George's chapel in Windsor. Celia was a guest at Harry and Meghan's nuptials. Celia joined famous guests at last month's royal wedding that included David and Victoria Beckham, Oprah Winfrey, and Priyanka Chopra.