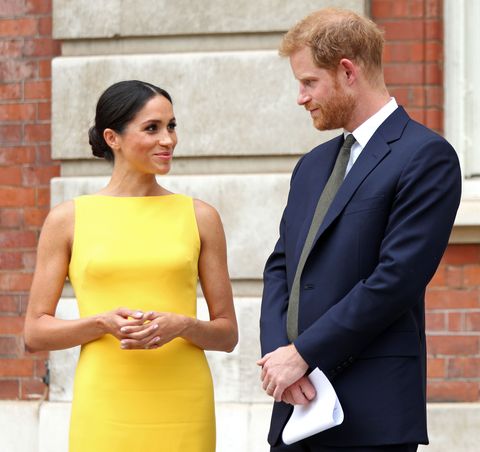 Just in case there were any lingering doubt, Prince Harry puts Meghan Markle first, ahead of everything—including long-standing royal traditions.

Last weekend, the royal family trekked out to Scotland for a family vacation. Because these are the royals we're talking about, the vacation included staying at Balmoral Castle (one of Queen Elizabeth II's personal favorite getaway spots) and acting like nothing has changed since the 1850s.

Okay, yes, that's an exaggeration, but one of the primary activities of the trip was the traditional royal grouse hunt (which can traced back to 1853). Prince George made headlines (and a little controversy) last week, when he participated in his first-ever grouse hunt at the young, young age of five.

George was joined by his mother, Kate Middleton, and most of the rest of the Windsor clan at least met up for a celebratory "way to hunt grouses, George" lunch after. Notably absent from the hunt? Prince Harry.

According to Express, Harry—an avid hunter who participated in his own first grouse shoot 21 years ago—skipped out on the royal tradition, reportedly to appease his new wife, Meghan Markle, who is an outspoken advocate for animal welfare.

Harry also skipped a hunt in December, shortly after he and Meghan announced their engagement, according to The Sun. The decision reportedly "stunned" the royal family.

"The Boxing Day shoot was always going to be a tricky issue. Meghan is a keen animal rights campaigner and doesn’t like hunting in any form," a royal source told The Sun. "Harry loves it and has always been out there on Boxing Day. But if it means breaking with long-standing royal traditions to avoid upsetting her, so be it. It’s fair to say that there are some pretty stunned faces around here."

It's not clear if Meghan explicitly asked Harry to skip the hunt or if made the decision independently, but it does seem like her views on animal rights probably played a part.

"If Meghan’s not comfortable with him doing the shoot, he wouldn’t want to upset her," the royal source said.

Kayleigh Roberts Contributor Kayleigh Roberts is the weekend editor at Marie Claire, covering celebrity and entertainment news, from actual royals like Kate Middleton and Meghan Markle to Hollywood royalty, like Katie Holmes and Chrissy Teigen.
Advertisement - Continue Reading Below
More From The Ultimate Guide to the Royal Family
Prince William Just Got a New Royal Title
Harry Felt Constrained by Royal Duties Growing Up
Advertisement - Continue Reading Below
Er, Meghan and Kate Haven't Spoken Since Megxit
Why Harry and Meghan Should Keep Their Protections
Why the Queen Canceled One of Her Annual Events
Meghan & Harry's Trademark's Been Blocked for Now
People Think Prince Charles Ignored Mike Pence
Meghan Markle's $65 Sunglasses Have Been Restocked
Meghan Markle Would Love to Be the Breadwinner
I Need Kate Middleton's Leopard Print Skirt