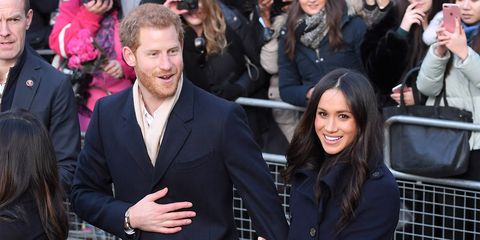 The Daily Mail cites royal biographer Sally Bedell Smith as the source of the name, which it characterizes as "unusual."

While the Mail says the meaning behind the name is unclear and speculates that it could be a nod to Harry and Meghan's upcoming tour of Australia and New Zealand, it could also be a reference to a number of pop culture milestones.

Let's start with the obvious: The Wizard of Oz.

This would be an amazing reference for several reasons. First, it's pure magic and nostalgia. Second, it's a nod to Meghan's own journey (a girl from America who gets swept away on a magical journey—squint and it's basically the same). And third, every dog is inherently great and powerful.

But that's not the only thing they could be referencing. Meghan and Harry could also be diehard Buffy the Vampire Slayer fans and making a reference to Seth Green's character on the show, who was named Oz.

Buffy's Oz was a werewolf, making him maybe the most appropriate character to name a dog after.

And, on a darker note, it could also be a reference to the HBO prison drama Oz. It's probably not, but it could be.

Whatever the inspiration, it's a perfect name for a new royal doggo.

Oz is thought to be a replacement for Meghan's beloved Labrador-Shepherd mix, Bogart, who she had to re-home and leave behind for his own well-being (he was considered too old to make the flight) when she moved to the UK to be with Harry. Meghan did bring rescue Beagle, Guy, along for her big move though—so Oz has one sibling around already.

Kayleigh Roberts Contributor Kayleigh Roberts is the weekend editor at Marie Claire, covering celebrity and entertainment news, from actual royals like Kate Middleton and Meghan Markle to Hollywood royalty, like Katie Holmes and Chrissy Teigen.
This content is created and maintained by a third party, and imported onto this page to help users provide their email addresses. You may be able to find more information about this and similar content at piano.io
Advertisement - Continue Reading Below
More From The Ultimate Guide to the Royal Family
46 Moments That Changed the Royal Family Forever
A Look Back at Princess Anne's Life in Photos
Advertisement - Continue Reading Below
A Look at Royal Family Portraits Through the Years
Charlotte Looks Like the Queen and Prince William
Charles Shared a Rare Childhood Pic with Philip
Charlotte Looks So Grown Up in Her Birthday Pics
Harry's Next Trip to the U.K. Is in Serious Doubt
Prince Charles Has *Not* Forgiven Prince Harry
See New William and Kate 10th Anniversary Photos
30 Surprising Royal Pregnancy Traditions