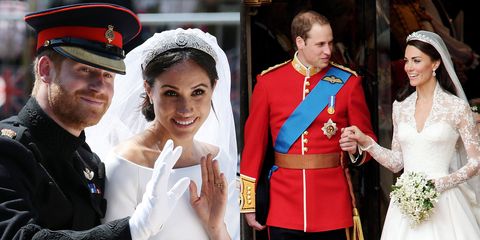 The royal family knows how to do romance. From afar, it kind of seems like they live in one giant rom-com designed to make the rest of us feel inferior. They probably don't, but it feels that way.

Prince Harry and Meghan Markle's love story was especially rom-com-y and captivated the hearts and imaginations of hopeless romantics all over the world. Turns out, Harry and Meghan's perfect royal romance is even sweeter than we previously knew—their love story shares something very sweet in common with Prince William and Kate Middleton's.

For their third date, Harry and Meghan famously camped under the stars in Botswana. When they married in May, speculation about their possible honeymoon destinations centered on African getaways. Africa has been a very important part of the Harry and Meghan fairytale.

Turns out, it's also a big part of Will and Kate's fairytale. When it came time for Will to propose to Kate, he took her to Kenya for the special moment.

"I didn't really plan it that far in advance, like I just knew I wanted it to feel comfortable where I did it and I wanted it to mean something, other than just the act of getting engaged," he explained to CNN of his choice of proposal venues.

Africa has always had a special place in both William and Harry's lives. After their mother, Princess Diana, died in 1997, Prince Charles took his sons to Africa to get away from the media circus surrounding her death.

"I regularly daydream. Africa is definitely one of the places I go to. It does completely settle me down. [Kate] understands what it means to me being in Africa, and my love of conservation," Will said according to CNN.

Clearly, this place still means a lot to both of the princes and it's a part of them that they want to share with the women they love.

This content is imported from {embed-name}. You may be able to find the same content in another format, or you may be able to find more information, at their web site.
Kayleigh Roberts Contributor Kayleigh Roberts is the weekend editor at Marie Claire, covering celebrity and entertainment news, from actual royals like Kate Middleton and Meghan Markle to Hollywood royalty, like Katie Holmes and Chrissy Teigen.
This content is created and maintained by a third party, and imported onto this page to help users provide their email addresses. You may be able to find more information about this and similar content at piano.io
Advertisement - Continue Reading Below
More From The Ultimate Guide to the Royal Family
Harry Carries Briefcase That Reads "Archie's Papa"
Meghan Markle and Prince Harry Arrive in NYC
Advertisement - Continue Reading Below
Princess Beatrice Has Given Birth to a Baby Girl
How Meghan & Harry Spent Their 2-Year Anniversary
Charlotte Has Two Major Milestones Coming Up
Kate Made a Very Common Shoe Shopping Mistake
The Queen Is Lawyering Up, Apparently
Harry & Meghan Are Still Close to the Queen, TYVM
Archie Inspired Harry and Meghan to Take a Stand
Harry & Meghan Had a Hard Time Leaving Royal Life