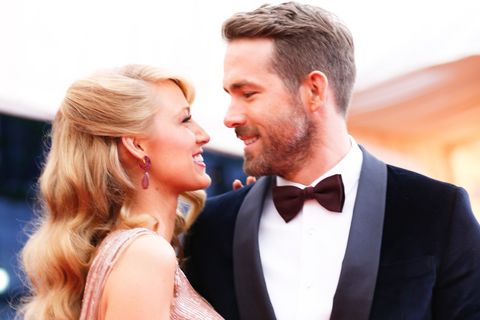 If there were an award for Best Use of Social Media by a Celebrity Couple, Blake Lively and Ryan Reynolds might just win it (although Chrissy Teigen and John Legend would definitely give them a run for their money). Blake and Ryan have a long history of trolling each other on Instagram and Twitter.

Sometimes they troll for fun, like this Valentine's Day exchange that will go down in history:

Sometimes they troll for special occasions, like when Ryan wished Blake a happy birthday in 2017 with this deliberately cropped photo, which he captioned, "Happy Birthday to my amazing wife."

Earlier this month, Blake rolled into Ryan's comments when he posted an Instagram promoting his Aviation Gin brand, which was, thankfully, captured by the best Instagram account around, Comments by Celebs:

Last night, Blake and Ryan jumped on Twitter with what started as some supportive cross-promotion and quickly turned into a public version of a text us normals would blush if someone else read, let alone tweeted. We have Blake's new movie, A Simple Favor, to thank for the flirty exchange.

"This movie cured me of my virginity. See it this weekend! @ASimpleFavor #CertifiedFresh," Ryan tweeted, along with a link to the movie's Rotten Tomatoes page.

For Ryan Reynolds, that's downright innocent. Blake took it upon herself to escalate things, pictographically, in her reply.

".@VancityReynolds 💋♥️🍆💥 (No that’s not emoji climaxing. I just really like eggplants. Pyrotechnic ones.)," she wrote.

.@VancityReynolds 💋♥️🍆💥 (No that’s not emoji climaxing. I just really like eggplants. Pyrotechnic ones. ) https://t.co/RSygJfHIAJ

Emojis are in your court, Ryan.