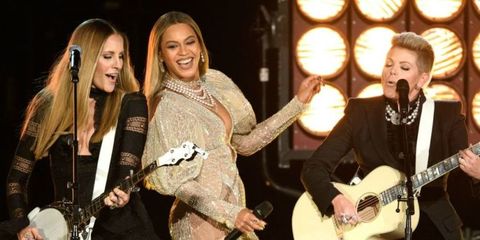 Beyoncé featured a rollicking country song "Daddy Lessons" on her latest album, Lemonade. And in a surprise moment, the pop superstar took that song to country music's biggest night: the CMA Awards.

The Dixie Chicks, who had previously covered the track, joined Beyoncé on stage for a performance that was nothing but fun. Featuring a chorus of horns, fiddles, and Texas shoutouts, it was clear both the artists and the audience both had a ball. It was undeniably the most talked-about moment of the night, and even had two Snapchat filters dedicated to the show's "countdown" to Beyonce.

Though a few people grumbled that Beyoncé wasn't a "country" artist, fans seemed to love it on social media, with stars like Reese Witherspoon tweeting their support of the performance.