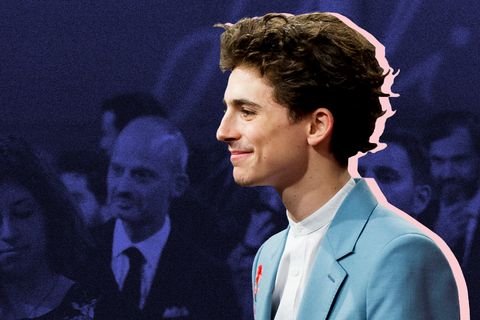 Hello, golden plovers, and welcome back to another edition of This Week in Timothée Chalamet. Thanks for bearing with me after last week’s terrible news cycle (your notes meant a lot to me, by the way), but I’m happy to report that time has continued to pass and we can move from the wall-to-wall political mayhem to the news that's keeping me up at night: OMG DOES TIMMY HAVE A GIRLFRIEND?!

Even though things may seem dark, it’s important to take care of yourself. Take some deep breaths, get a glass of water and a healthy snack, make sure you’re sitting in a comfortable position (maybe with a pet!), and spend the next seven or eight minutes with me catching up on two weeks’ worth of Timothée news.

Now, where were we?

I know I once said I didn’t want to address the sordid rumors that tend to swirl around adorable and promising young actors with regards to their social lives—Not now! Not to my sweet Timmy!—but I simply cannot ignore these photographs.

Apparently, Timmy Tim has been spotted canoodling (a word used exclusively in gossip columns that I am thrilled to be able to use for the first time, mazel tov to me) with one Miss Lily Rose Depp.

The daughter of Johnny Depp and Vanessa Paradis is 19 years old, a budding model and actress, and stars opposite Timmy in the upcoming Netflix film The King—about which, as ever, I refuse to learn any more information. All I know is that it’s based on Shakespeare’s King Henry IV, may not utilize actual Shakespearean dialogue, is directed by David Michôd, produced by Brad Pitt, and co-stars Timmy, Depp, Robert Pattinson, Joel Edgerton, and Ben Mendelsohn. Filming wrapped last month in Budapest, and the haircut that Timmy got for the titular role made a lot of headlines. Oh, and the film will be distributed by Netflix early next year. But that’s IT so STOP asking me about THE KING!!

Anyway, this rumor has legs not only because these two pointy-cheekboned cuties are both Franco-American (c’est vrai, mes amis!), but also thanks to the fact that they were spotted all around New York City doing things like touching shoulders and walking near one another. Jeez guys! Cut it out with the PDA, am I right?

Neither camp has confirmed nor denied, but it’s reported that the author of a moderately popular MarieClaire.com column is “here for this union” and “very proud of her son, Timothée Chalamet, for going steady with a nice young lady.”

Last we checked up on Dune, the Denis Villeneuve–directed reboot of the 1984 David Lynch movie based on the 1965 Frank Herbert book (ask me more about Dune!), Timmy was the rumored lead. He’d be taking on the role of Paul Atreides, once played (poorly) by Kyle MacLachlan (sorry, Kyle, ILY!)

That’s a big deal: A revisit of Dune would probably be a blockbuster with a huge budget and some kind of primo summer opening, making it Timmy’s bonafide mainstream debut. Because, while he is the brightest star in our galaxy, did you know there are people in this very country who have never heard of Timothée Chalamet? I don’t want to actually meet any of those people, but I have been told that they exist.

And Timmy, who has since confirmed his part in the flick, knows it’s a big deal, telling The Playlist, “What’s especially inspiring about Denis' films are the size of them. They reach a big audience. These are films meant to play in front of big crowds...So, that would be a dream come true and is going to be a dream come true. And, I’m chomping at the bit for that experience. I can’t wait.”

It’s actually champing at the bit, but whatever. This movie is going to rule and Timmy as Atreides is going to be legitimately iconic. Like, so iconic that if I’m ever wrongfully convicted of the murder of my adulterous partner and their lover and then sent to a quaint but brutal New England prison where I befriend a fellow inmate over the decades during which I am quietly planning my escape, a full-size poster of Timothée Chalamet as Paul Atreides will cover the tunnel in my cell through which I will one rainy evening crawl to freedom.

Bob Odenkirk will also be in Little Women!

I had been feeling weird and anxious and I realized it’s because it’s been awhile since I’d gotten any Little Women news.

Last week, it came out that Bob Odenkirk, of Better Call Saul and Mr. Show fame, reportedly signed on for the Greta Gerwig adaptation of the Louisa May Alcott novel, which will also star Timmy, Meryl Streep, Laura Dern, Emma Watson, Saoirse Ronan, and Eliza Scanlon.

Does this mean Little Women takes place in the Breaking Bad cinematic universe? What if Jo and Laurie start cooking meth to pay for Beth’s medication? There are so many possibilities here, I simply cannot wait.

Timothée Chalamet ate, or perhaps just stood near, a plate that contained an omelet and some bacon on a sunny patch of the Sunset Tower Hotel terrace. It's documented on his Insta for some reason:

There are also some other photos in the mix, each as "um, sure" as the last—even the face-obscured mirror selfie because I mean, truly, what is the point of not showing his face, it is the best part? Again, this is mediocre content at absolute best and yet 450k+ people liked it so, IDK, maybe taste is relative? It's just nice to see him posting again.

Anyway, that’s all I got for you this week but I want you to know I’m thinking about you and I’m really glad we could spend this time together.

Have a beautiful weekend, you shining bronze cuckoos.