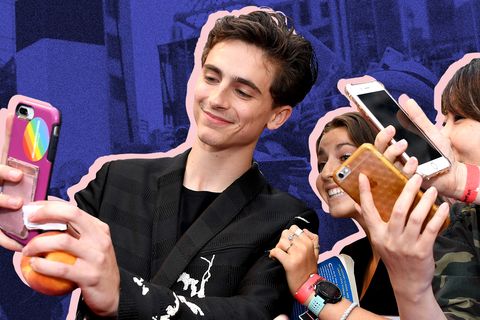 Hello, black-capped chickadees, and welcome to another weekly edition of This Week in Timothée Chalamet. Now that the fervor of the Toronto International Film Festival has died down—where Timmy was the talk of the town, and not exclusively because of his bold new ‘do—many of us are waiting with bated breath to see what Timmy’s going to do next. And by "many of us" I mean me and at least three of you who DM me, plus my editors who expect me to file this column every Friday and it better include something so. You know. That’s like at least eight people with bated breath.

What were we talking about? Oh yeah, Timothée Chalamet. He showed up on Instagram, and not just his own.

Here is what I méan:

This kid. I swear to god.

The last time Timmy updated his Insta, it was to show off the official poster for Beautiful Boy, a movie that has since had its TIFF premiere and garnered Oscar buzz for Timmy & Co. That means he hasn't posted to his Instagram since all the way back in June. JUNE! Come on, Tim! Thank god other things happened that I could build a column around (sort of)! I could have lost my job. People’s livelihoods are at stake here, especially when a not inconsiderable portion of said livelihood involves writing about you once a week!

Fortunately, he posted something new:

Aww! He is so that withholding artsy dude from your New England liberal arts college who smoked Gauloises outside the repertory theater and told you he didn’t see movies, he only watched films. (Remind me to call my therapist about the breakthrough I had while writing that sentence.)

In Timothée’s defense, though, if he didn’t cop to loving French Cinema in a public forum, I’m pretty sure the Académie Française is officially allowed to revoke his accent aigu.

Ugh. This is going to be a rough one. Good thing I’m pretty sure I glimpsed a shot of him in a wetsuit or I’d be nervous to see it at all. ;(

It. Is. Art. Here's what you can expect from @timmyillustrated:

I like to think I’m Beautiful Boy but if I’m honest with myself I’m probably more Elio.

There’s more where that came from, so follow this person IMMEDIATELY. Brava, Kayla.

And that’s the week that was, rainbow lorikeets. Have a lovely weekénd.