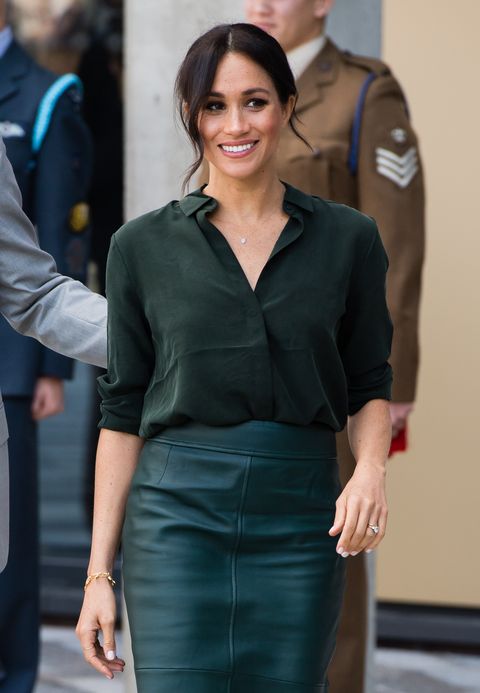 When two humans decide to combine their lives, both are bound to have to change, at least a little. Sometimes those changes are relatively small, like opening yourself up to trying a new brand of toothpaste and other times they're really big, like deciding to legally change your name. Since her high-profile royal wedding in May, Meghan Markle seems to have made a name change of her own.

Related Story
Meghan Markle on What Changed Her Life

While the members of the royal family don't exactly have a last name in the same way we normals do, their first name only styling is a kind of mark of membership to the family in and of itself. Since marrying Prince Harry, Meghan Markle appears to have dropped the "Markle" from her name — or, at very least from her signature.

Here's a picture of Meghan's signature from late March, almost two months before the royal wedding, when she signed the visitors book signed at the Titanic Belfast maritime museum in Belfast, Nothern Ireland:

Last week, Meghan and Harry traveled to their namesake, Sussex, where they signed the visitors book at Edes House in Chichester, West Sussex.

Pictures of Meghan's entry in the guestbook show just how much the Duchess' signature has changed since she became a royal. First, and most noticeably, Meghan has cleaned up her signature considerably, taking it from celebrity autography scribble to perfectly legible royal scrawl. Second, as Express points out, there doesn't seem to be any sign of her last name, Markle, in the revamped signature.

Like her husband, Harry, Meghan is now on a first name only basis with the world.

This content is imported from {embed-name}. You may be able to find the same content in another format, or you may be able to find more information, at their web site.
Kayleigh Roberts Contributor Kayleigh Roberts is the weekend editor at Marie Claire, covering celebrity and entertainment news, from actual royals like Kate Middleton and Meghan Markle to Hollywood royalty, like Katie Holmes and Chrissy Teigen.
This content is created and maintained by a third party, and imported onto this page to help users provide their email addresses. You may be able to find more information about this and similar content at piano.io
Advertisement - Continue Reading Below
More From The Ultimate Guide to the Royal Family
See the Royals Socialize at a 1991 Cocktail Party
Eugenie's Pics from Inside Harry and Meghan's Home
Advertisement - Continue Reading Below
Queen Trolled Tourists Who Didn't Recognize Her
Charles Expertly Ignored Boris Johnson's Snafu
How Kitty Spencer's Wedding Dress Honored Diana
Will & Kate Are Nervous About George's Future
George Won't Be Forced to Go to Boarding School
A Slice of Diana's Actual Wedding Cake Is For Sale
This Old Video of the Queen Saying "Nah" Is LOL
Diana Had a Secret Message on Her Wedding Shoes