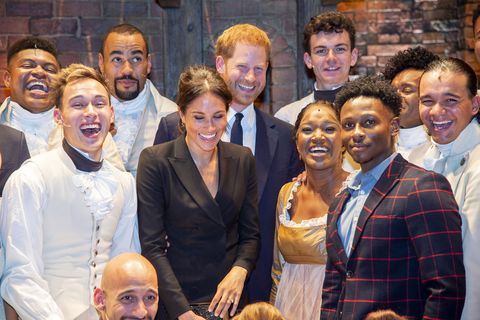 There’s a few particular occasions that spring to mind when trying to decide what Prince Harry and Meghan Markle’s cutest relationship moment could possibly be. Maybe the first time he affectionally kissed her on the head in public? The sweet reaction that he had as she walked down the aisle? And let’s not forget that romantic PDA display at the Sentebale polo that left everybody with heart tingles.

But hey, they might all pale in comparison to this blink-and-you’ll-miss-it part of their recent appearance at the Hamilton gala performance in London. Oh, you thought the black tuxedo dress and the impromptu karaoke was the best part of the evening? Wait until you see the video clip that caught the moment when the Duchess of Sussex accidentally revealed her sweet nickname for her husband.

After the show, the couple joined the entire cast on stage for a friendly chat and photocall to mark the charity occasion. After meeting the actors face to face, Harry took his place behind Meghan and placed a protective hand on her waist for the photographs, which was pretty lovely in itself. However, the new video reveals the one magical moment that we all missed, as Meghan—standing in front of Harry—turns around and seemingly asks: “Can you see, my love?” It's. So. Nice.

”Can you see my love?“ Ups, Meghan looked genuinely embarrassed after revealing us how she secretly calls her Husband! 😍 and the reaction from the cast is adorable... Man die sind doch soooooo süß zusammen!!!!!

Of course, it could be a case of bad lip reading, but it's enough to make the entire Hamilton ensemble react. The hilarious part comes as the whole cast overhear her term of endearment and burst into a collective round of “AWH!”, leaving Meghan looking like she wanted the ground to swallow her up right there and then.

The royal family are partial to a nickname or two for one another. Previously, Kate Middleton explained that her brother-in-law Harry usually refers to her as Cath, while Kate has also confessed that Prince George has decided that his grandmother, Queen Elizabeth II, is better referred to as “Gan-Gan”.

Are you even still reading, or have you burst into a cloud of cotton candy and rose petals after watching that clip of Meghan and Harry? Yep, thought so.