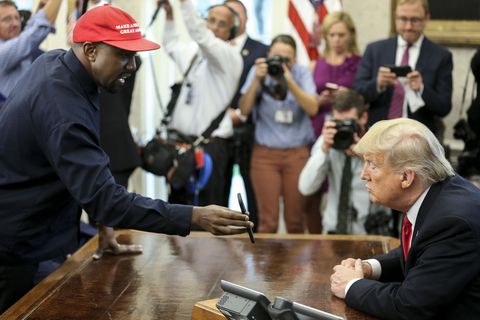 Lots of people had thoughts about Kanye West's recent meeting with Donald Trump. Not only were there those who disagreed with Kanye's decision to meet with Trump at all, but the singer also drew criticism for his comments during the meeting, which included an argument that time does not exist.

So, what does Kanye's wife, Kim Kardashian, think of her husband's latest political statement? According to CNN, a source close to Kim says the reality star is "not embarrassed" by what Kanye said during the meeting.

Kim spoke publicly about her support for Kanye and the meeting with Trump before it happened. In an interview with Extra, Kim defended Kanye's heart.

"I always say he isn't the best communicator, but he has the best heart," she said. "I know what he wants to accomplish... and I can't wait to see that happen."

Kanye's meeting with Trump was met with mixed reactions. The National Rifle Association tweeted in support of Kanye's comments, writing, "#Kanye couldn’t have said it better. We agree, Ye." The post continued, "Illegal guns are the problem, and we have the right to bear arms. The #NRA’s nearly six million members are glad to see a celebrity who gets it, and who is willing to stand with the #2A."

Others spoke out on social media against the meeting. Rapper T.I. wrote a lengthy post on Instagram about the meeting, saying in part, "This is the most repulsive, disgraceful,
embarrassing act of desperation & auctioning off of one’s soul to gain power I’ve ever seen." 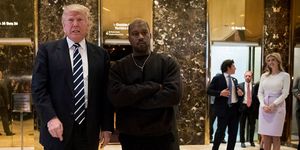 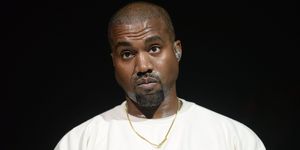 Kanye West Says He Would Have Voted for Trump
Kayleigh Roberts Contributor Kayleigh Roberts is the weekend editor at Marie Claire, covering celebrity and entertainment news, from actual royals like Kate Middleton and Meghan Markle to Hollywood royalty, like Katie Holmes and Chrissy Teigen.
This content is created and maintained by a third party, and imported onto this page to help users provide their email addresses. You may be able to find more information about this and similar content at piano.io
Advertisement - Continue Reading Below
More From Celebrity
Bennifer Recreated Their 2002 PDA Moment
Why Harry's Memoir Release Date Has Upset People
Advertisement - Continue Reading Below
The Royals Are Worried About Prince Harry's Memoir
Gabrielle Union Debuted a New, Short Haircut
J.Lo Made Out With Ben on IG for Her 52nd Birthday
Harry Is Putting the Queen in a Difficult Position
Are Will & Kate Sending a Message to Harry & Meg?
Harry and Meghan Reportedly Have a Four-Book Deal
Naomi Osaka Lit the Olympic Cauldron in Tokyo
John Legend Performed "Imagine" for the Olympics