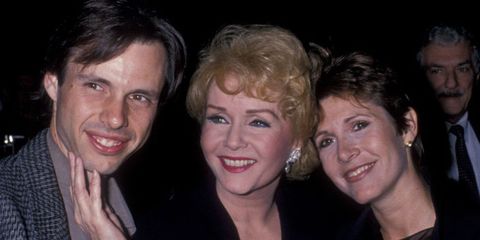 This week, the world lost not one, but two lights in the form of mother-daughter Hollywood icons Debbie Reynolds and Carrie Fisher. Fisher suffered a heart attack on December 23 and passed away four days later, on December 27. Reynolds died the next day after suffering a stroke.

In a heart-wrenching new interview with 20/20, Todd Fisher, Carrie's brother and Reynold's son, is opening up about what it's been like to lose his sister and mother in the same week. You might think someone in Todd's position would see nothing but sadness in the week's events, but according to The Hollywood Reporter, he sees it as "beautiful" and even "magical" in a way.

"It's horrible, but it's beautiful," he said. "It's magical they are together. It's beyond words, it's beyond understanding."

He explained that the family believes Debbie made a choice to leave and be with Carrie and they see a certain kind of beauty in that decision.

"From the family's perspective, this is Debbie's destiny," he said. "She didn't want to leave Carrie and did not want her to be alone."

In one particularly tear-inducing part of the interview, Todd tells the story of Reynold's final moments.

"She said that she really wanted to be with Carrie. And within 15 minutes from that conversation, she faded out. And within 30 minutes, she technically was gone," he explained.

Todd Fisher on death of mother Debbie Reynolds: “I watched her leave and go to Carrie.” WATCH TONIGHT ON @ABC2020: https://t.co/wzSZgHGNyA pic.twitter.com/UhukVW4NKr

The mother and daughter, who shared a close-knit, but at times strained relationship, will be buried together in a private, joint funeral service at Hollywood Hills' Forest Lawn Memorial Park, Rolling Stone reports.

Kayleigh Roberts Kayleigh Roberts is the weekend editor at Marie Claire, covering celebrity and entertainment news, from actual royals like Kate Middleton and Meghan Markle to Hollywood royalty, like Katie Holmes and Chrissy Teigen.
This content is created and maintained by a third party, and imported onto this page to help users provide their email addresses. You may be able to find more information about this and similar content at piano.io
Advertisement - Continue Reading Below
More From Celebrity
What Happens on Katie's Season?
Bennifer Recreated Their 2002 PDA Moment
Advertisement - Continue Reading Below
Why Harry's Memoir Release Date Has Upset People
The Royals Are Worried About Prince Harry's Memoir
Gabrielle Union Debuted a New, Short Haircut
J.Lo Made Out With Ben on IG for Her 52nd Birthday
Harry Is Putting the Queen in a Difficult Position
Are Will & Kate Sending a Message to Harry & Meg?
Harry and Meghan Reportedly Have a Four-Book Deal
Naomi Osaka Lit the Olympic Cauldron in Tokyo