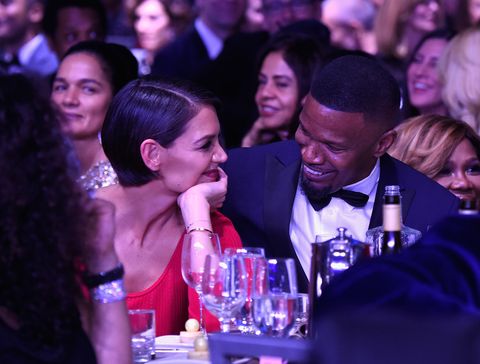 Celebrities don't always like to talk about their relationships, but Katie Holmes and Jamie Foxx have taken the "not confirming or denying" game to a new level. The actors, who have been rumored to be a couple since 2013, reportedly got each other custom-made perfumes as gifts. This news doesn't come from Holmes and/or Foxx, who are continuing their five-year streak of not talking about their very probable relationship. Nope, it comes from their perfume maker.

Sue Phillips, the founder and C.E.O. of Scenterprises, a custom fragrance company in New York, spilled the details about Holmes and Foxx's unique, bespoke gifts for each other in an on-camera interview with Page Six.

“Jamie came in on his own to actually create a fragrance for Katie,” Phillips, described as a "celebrity perfumist" told Page Six.

Apparently, Holmes was so into her signature scent that she paid Phillips a visit herself and walked out with not just one, but two custom creations.

“She came in and we had a nice, lovely, individual consultation, and then I said well let’s make something for Suri and for Jamie. So that was my gift for her," Phillips said.

Holmes and Foxx aren't Phillips' only celebrity clients. She also claims to have create custom perfumes for other superstars like Zendaya and Susan Sarandon.

"In this day and age of selfies everybody is looking to really express themselves and the opportunity to have your own custom scent is now readily available," Phillips said of why she thinks so many stars (and, presumably, just wealthy normals) use her service.

Now, if Phillips just starts selling Holmes and Foxx's scents as a gift set, we can all smell like love shrouded in mystery.