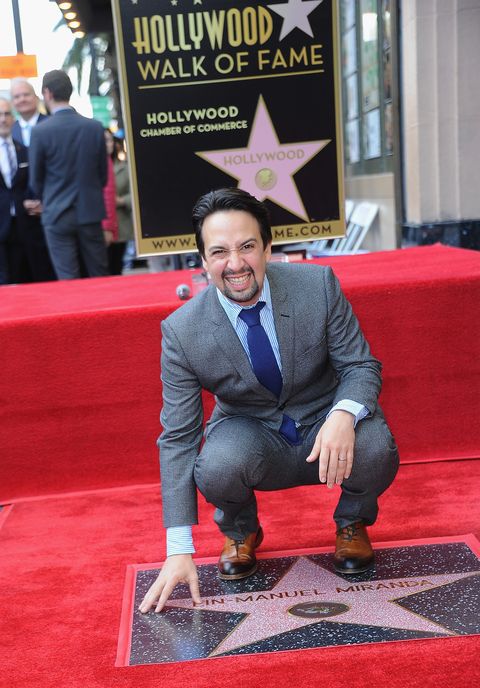 On Friday, Hamilton playwright and star Lin-Manuel Miranda was honored with a star on the Hollywood Walk of Fame.

Miranda, who is best known for his work on Broadway, is transitioning into life as a full-fledged movie star, with a starring role in December's upcoming Mary Poppins Returns. The actor and songwriter also famously penned many of the songs from Disney's 2016 animated hit, Moana.

The multi-hyphenate, who already has three Tonys, three Grammys, an Emmy, and a Pulitzer Prize, got emotional during the ceremony.

"I feel like I’m in a dream," Miranda said during the ceremony unveiling his Walk of Fame star. "Reports of my fame are still probably greatly exaggerated but the fact that there is a star marking where I got to say these lines [referring to his performance of ‘In The Heights’ at the Pantages Theatre], what a dream come true that is for me."

West Side Story star Rita Moreno and parody king Weird Al Yankovic (whom Miranda met years ago and almost collaborated with on a musical) both spoke at the ceremony.

"Because you made the choice to focus the brilliance of your star power for the goodness of others...Your energy is boundless, hombre. Your heart is bigger than the west side — well, OK, your heart is in the Heights."

When it was his turn to speak, Yankovic joked:

“Out of all the awards and honors Lin-Manuel has won in the last few years, this is easily in the top thousand or so. This is somewhere between winning the MacArthur Genius Grant and being No. 33 across in the Des Moines Register Sunday crossword puzzle.”

It was an emotional day all around.

Watch the entire ceremony below:

This content is imported from YouTube. You may be able to find the same content in another format, or you may be able to find more information, at their web site.
Kayleigh Roberts Contributor Kayleigh Roberts is the weekend editor at Marie Claire, covering celebrity and entertainment news, from actual royals like Kate Middleton and Meghan Markle to Hollywood royalty, like Katie Holmes and Chrissy Teigen.
This content is created and maintained by a third party, and imported onto this page to help users provide their email addresses. You may be able to find more information about this and similar content at piano.io
Advertisement - Continue Reading Below
More From Celebrity
Kate and William Holiday In Cornwall
Blake Lively Wears a Pink Sequin Dress
Advertisement - Continue Reading Below
Meghan Markle Hangs Out With Melissa McCarthy
Simone's Boyfriend Sent Her the Sweetest Message
What Happens on Katie's Season?
Rebel Wilson Recreated This Britney Spears Look
Jennifer Lopez Flew Back From European Getaway
Jennifer Lopez Wears Old Bracelet From Ben Affleck
Simone Biles Cheers on MyKayla Skinner
See the Royals Socialize at a 1991 Cocktail Party