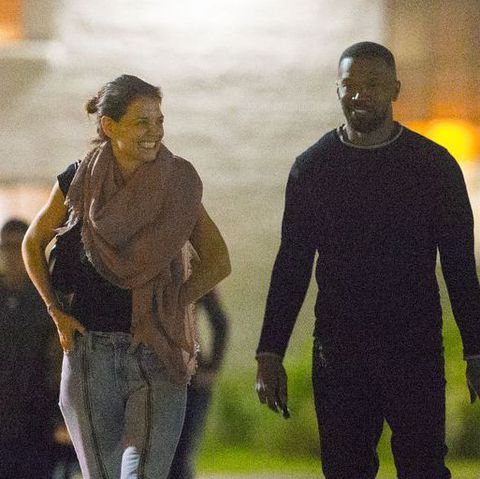 Seeing Katie Holmes and Jamie Foxx out in public is like a lunar eclipse. It's rare, but when it happens it's so beautiful and rare that it's celebrated like a holiday. It's been nearly six years of hearing whispers and inklings of their rumored love, and while they've still never confirmed that they're dating or not... those two are totally dating. There's a reason those engagement rumors caught fire, because if you look at photos of the two of them, these two are in LOOOOOOOVE.

On December 2, the (rumored) lovebirds hit the streets of New Orleans for a date. She's there filming a movie adaptation of best-selling self-help book The Secret, and Foxx has been filming a sci-fi film for Netflix with Joseph Gordon-Levitt. They both looked amazing, but the absolute best part of their respective ensembles is the smiles on their faces. Like, I don't think I've ever been this happy to be in someone's presence ever, and here these two are, hunky-dory, thrilled in their relationship. I'm so happy for them, I just might shriek.

While yes, I may throw a party every time an image of the two of them comes out, I also applaud their desire for privacy in their relationship in a time when everyone is making up (and breaking up, looking at you, Cardi) on Instagram. Do your love the way you want to, and forget the others! Let the tabloids do the speculating. If you like the lunar eclipse-style of love, that's fine by me.