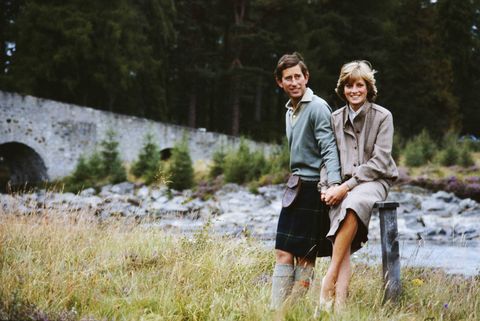 By now, the most negative parts of Prince Charles and Princess Diana's relationship are well-known. They barely knew each other when they got engaged. He felt pushed into the relationship. Neither of them very very happy for very long. There are a lot of sad parts of the Charles and Diana love story.

But, there were also bright spots. According Express, an author and royal expert says that Diana stood out to Charles right away thanks to a very deep and thoughtful conversation she initiated when they met.

In Diana: In Her Own Words, royal biographer Andrew Morton wrote:

"Diana was seated next to Charles on a bale of hay and, after the usual pleasantries, the conversation moved on to Earl Mountbatten’s death and his funeral at Westminster Abbey. In a conversation which she later recalled to friends Diana told him: 'You looked so sad when you walked up the aisle at Lord Mountbatten’s funeral. I thought: It’s wrong, you’re lonely, you should be with somebody to look after you.'

"Her words touched a deep chord. Charles saw Diana with new eyes. Suddenly, as she later told her friends, she found herself overwhelmed by his enthusiastic attentions. Diana was flattered, flustered and bewildered by the passion she had aroused in a man 12 years her senior. From then on their relationship began to develop."

This little insight into the sweet beginnings of Charles and Diana's relationship isn't just interesting and informative, it's reassuring that they did share a bond, even if walking down the aisle wasn't necessarily the right move.