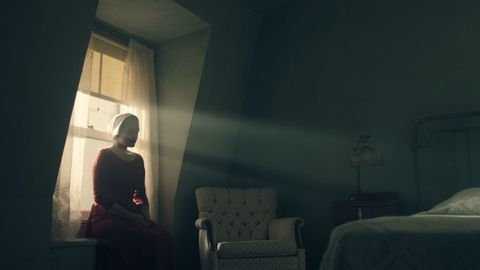 The final teaser trailer for Hulu's remarkable new drama The Handmaid's Tale is here, and its timing could not be more appropriate for A Day Without A Woman. Adapted from Margaret Atwood's seminal 1985 novel of the same name, the series takes place in a dystopian near-future where much of America has become a totalitarian society, and women's rights have been abolished.

Created as a consequence of environmental disasters and a rapid decline in birthrates, the Republic of Gilead is ruled by a theocratic military regime that treats women as property of the state. The show's protagonist Offred (Elisabeth Moss), as one of the few remaining fertile women, is forced into sexual slavery as a 'handmaid' in the household of the Commander (Joseph Fiennes). Determined to survive and find the daughter that was taken from her, Offred shrewdly navigates the power dynamics of a treacherous world in which anyone could be as a spy for the regime.

The cast also includes Samira Wiley as Offred's best friend Moira, Alexis Bledel as her fellow handmaid Ofglen, Yvonne Strahovski as the Commander's wife Serena Joy, Ann Dowd as the handmaids' fearsome teacher, Max Minghella as the Commander's chauffeur, Madeline Brewer as another handmaid, and O-T Fagbenle as Offred's husband from before the formation of Gilead. Produced by MGM, the show is created by Bruce Miller, with Atwood serving as a consulting producer.

Needless to say, the notion of America becoming a misogynist dystopia couldn't possibly feel more relevant. Everyday reality is peppered with moments that could be taken right from The Handmaid's Tale and its haunting depiction of how society fell—whether it be the lawmaker who called pregnant women "hosts", the GOP chair who called equal pay unfair to men, or the leader of the free world actively trying to undermine women's access to abortion.

The Handmaid's Tale launches on Wednesday, April 26. Episodes will be released weekly on Hulu.