If you thought that Game of Thrones would get tied up with a neat bow and a happy ending then, well, no offense, but have you actually ever watched an episode of Game of Thrones?

The hit HBO drama is gearing up for its eighth and final season this summer and it's sure to be tough to watch. The only thing harder than watching it? Filming it, apparently. Kit Harington, who plays broody King of the North/secret King of Dragons Jon Snow, revealed in a new interview with GQ Australia that the cast felt like the show's final season was literally designed to make them want to die IRL, basically. In Harington's actual words:

That's not all though! Harington doubled down, explaining that filming the fantasy epic's final season was so grueling that the cast didn't even feel sad about finishing work on the show. They were basically just relieved to be done with the arduous shooting process (and, no doubt, the emotional drain of bringing their characters' stories to an end):

"It was like it was designed to make you think, "Right, I’m f*cking sick of this.' I remember everyone walking around towards the end going, 'I’ve had enough now. I love this, it’s been the best thing in my life, I’ll miss it one day—but I’m done.'"

Sounds rough, but as the saying goes, when you play the game of thrones, you win or you die, right? 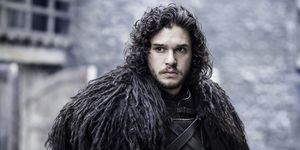