The Super Wolf Blood Moon lunar eclipse (where the moon turns a cool, rusty shade of red) happened in the wee hours of Sunday night to Monday morning. Speculation abounded about the effects it would have on feelings, alignment, and menstrual cycles. And lots of celebrities were there to document all their reactions in real time, and their reactions ranged from funny to serious and thoughtful, as first spotted in Entertainment Tonight.

It seemed like the night was a moment to reflect and take in positive energy. Jenna Dewan had a very spiritual response to the event, taking the opportunity to engage in what she called a full moon ritual, per her Instagram stories. She encouraged others to do the same: Write down what they wanted to let go of, and burn the piece of paper, thereby releasing the negative thoughts and energy. Starting 2019 fresh!

Chrissy Teigen had thoughts about what the moon might represent as well, taking a somewhat more skeptical attitude: "I dunno if it works but it can’t hurt," she explained. Chrissy also had a very helpful chart of when people could go outside and watch it (thanks Chrissy!):

Super duper blood wolf blood super moon tonight! Next one in 18 years. Take it in, burn shit you’ve been holding onto for too long, start fresh and be better! I dunno if it works but it can’t hurt. pic.twitter.com/JGAoH52Rn1

Later, she went outside with husband John Legend to investigate what she titled #moonwatch, along with their bulldog Paul. Paul had the best response to the entire experience:

She also documented her (mostly unsuccessful, in her words) attempts to capture the event on her iPhone, via her Instagram stories.

Ariana Grande also took a video of the red moon from her phone on Instagram Stories, then tweeted about it:

she loves a blood moon tbh

Actress Lili Reinhert also got in on the action too:

Feel like I should’ve taken advantage of the blood moon and done a spell or something. Prob should’ve left my crystals outside to charge in the moonlight.

Related Stories
A Blood Moon Is Coming This Weekend 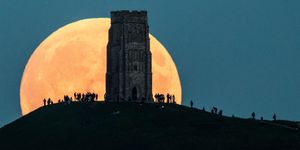