Princes William and Harry, now with their wives Kate Middleton and Meghan Markle, have made mental health a huge priority. Both couples want to raise awareness in an area that still isn't always discussed openly, yet is very personal for the two brothers: Their mother, Princess Diana, talked openly about her mental health struggles before her early death.

Harry and William have since made resources available for those struggling—especially at a young age—with the kind of pain they went through. In 2017, William, Kate, and Harry began the charitable campaign Heads Together, and they've dedicated significant time and resources to it. Heads Together is designed to "tackle stigma and change the conversation on mental health with fundraising for a series of innovative new mental health services."

The royal Fab Four has taken this mission to heart not just through resources and funding, but also by simply discussing their own struggles—a seemingly small thing that can make big cultural changes. Just like their mom, the two princes have been open and honest when they've struggled, and their wives have joined in, too.

Here are the most revealing things each member of the Fab Four have said about overcoming hardship in their own lives and prioritizing their mental health:

"Losing a close family member is one of the hardest experiences that anyone can ever endure. Never being able to say the word 'Mummy' again in your life sounds like a small thing. I, too, have felt—and still feel—the emptiness on such a day as Mother's Day," William said when he became patron of the Child Bereavement Charity in January 2014.

He added, "Real grief often does not hit home until much later. For many it is a grief never entirely lost. Life is altered as you know it, and not a day goes past without you thinking about the one you have lost. I know that over time it is possible to learn to live with what has happened and, with the passing of years, to retain or rediscover cherished memories."

Men especially feel the need to pretend that everything is okay, and that admitting this to their friends will make them appear weak. I can assure you this is actually a sign of strength.

Trying to maintain a high-stress job made William realize he needed more balance. "The relation between the job and the personal life was what really took me over the edge," he said at the mental health This Can Happen conference in November 2018. "And I started feeling things that I’ve never felt before. And I got very sad and very down.... You start to take away bits of the job and keep them in your body."

Regarding his kids, William said in an April 2017 interview for Heads Together, "Catherine and I are clear that we want both George and Charlotte to grow up feeling able to talk about their emotions and feelings. We will all go through tough times in our lives, but men especially feel the need to pretend that everything is okay, and that admitting this to their friends will make them appear weak. I can assure you this is actually a sign of strength."

"Personally, becoming a mother has been such a rewarding and wonderful experience. However, at times it has also been a huge challenge, even for me, who has support at home that most mothers do not," she said in a speech to the Royal College of Obstetricians and Gynaecologists in March 2017. "For many mothers, myself included, this can, at times, lead to lack of confidence and feelings of ignorance."

"It's so hard. You get a lot of support with the baby as a mother, particularly in the early days, but after the age of one it falls away. After that there isn't a huge amount—lots of books to read. Everybody experiences the same struggle," Kate said at a Family Action charity event in January 2019.

“Mental health is how we feel and think. Things that can’t really be seen, but that affect us every day and talking about them can feel difficult…Sometimes, it’s just a simple conversation that can make things better," Kate said when she launched a new youth health initiative at the Anna Freud Centre in September 2018.

"When I first started out—and I’ve learned a lot in a short period of time working with organizations—I was very naive myself as a parent of really just how important particularly the early years are for children’s futures. And how critical it is, everyone looking after children at a critical time, teachers, parents, and everyone who’s caring for them, how important it is that we get it right," Kate said at the Royal Foundation's Mental Health in Education conference in February 2019.

"I can safely say that losing my mum at the age of 12, and therefore shutting down all of my emotions for the last 20 years, has had a quite serious effect on not only my personal life but my work as well," he told The Telegraph in April 2017. "I have probably been very close to a complete breakdown on numerous occasions.... The experience I have had is that once you start talking about it, you realize that actually you’re part of quite a big club."

Once you start talking about it, you realize that actually you’re part of quite a big club.

In that same interview, Harry reflected back on the years following his mom's death, saying, "My way of dealing with it was sticking my head in the sand, refusing to ever think about my mum, because why would that help? [I thought] it’s only going to make you sad, it’s not going to bring her back. So from an emotional side, I was like, right, don’t ever let your emotions be part of anything. And then [I] started to have a few conversations and actually all of a sudden, all of this grief that I have never processed started to come to the forefront and I was like, there is actually a lot of stuff here that I need to deal with.”

Harry said in April 2017 that his brother was the reason he sought help. "[F]or me personally, my brother, you know, bless him, he was a huge support to me. He kept saying, 'This is not right, this is not normal, you need to talk to [someone] about stuff, it's okay.'"

"My 20s were brutal—a constant battle with myself, judging my weight, my style, my desire to be as cool/as hip/as smart/as 'whatever' as everyone else. My teens were even worse–grappling with how to fit in, and what that even meant," Meghan wrote in a blog post on her 33rd birthday on her old website The Tig in August 2014. "[I]t takes time. To be happy. To figure out how to be kind to yourself. To not just choose that happiness, but to feel it."

"You see photos on social media and you don’t know whether she’s born with it or maybe it’s a filter. Your judgement of your sense of self-worth becomes really skewed when it’s all based on likes,” Meghan said on her trip with Prince Harry to New Zealand in October 2018.

According to onlooker Jessina Oakes, "[Meghan] said a really beautiful quote. She said: 'Flattery and criticism run through the same filter.' She said it was very freeing that she no longer has social media." 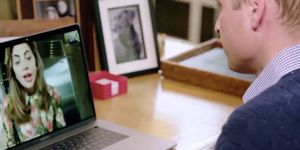 Prince William and Lady Gaga Talk Mental Health
26 Important Quotes by Celebs About Mental Health
Katherine J Igoe Katherine’s a Boston-based contributing editor at Marie Claire online who covers celebrity, fashion, entertainment, and lifestyle—from “The Bachelor” to Everlane to Meghan Markle.
This content is created and maintained by a third party, and imported onto this page to help users provide their email addresses. You may be able to find more information about this and similar content at piano.io
Advertisement - Continue Reading Below
More From The Ultimate Guide to the Royal Family
The Queen's Corgis Are Helping Her With Her Grief
Charles is Looking Forward to Seeing Harry Again
Advertisement - Continue Reading Below
Will & Harry to Walk Together at Philip's Funeral
Prince Charles Addresses Prince Philip's Death
Prince William Pulls Out of 2021 BAFTA Appearances
Prince Philip Said He Had No Desire to Live to 100
The Queen Was by Prince Philip's Side When He Died
Prince Harry Is "Really Upset" Over Philip's Death
Will Harry & Meg Attend Prince Philip's Funeral?
The Queen Is Hopeful Prince Harry Will Return Home